From family days out with the kids and dog in tow to your first walking holiday, these Peak District routes were picked with beginners in mind. 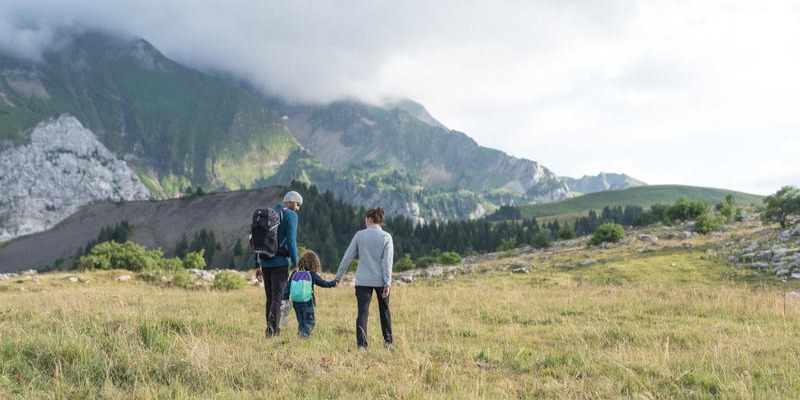 Credit: A family taking their first hike together in nature

There are plenty of short strolls to choose from as well as longer paths that’ll help you work up a light sweat before leading to perfect picnic spots and pubs, and despite this infamous National Park’s name, we promise we’ve steered clear of the really tough inclines.

Mam Tor, which means ‘Mother Hill’, so named because several landslides have created lots of mini hills beneath it, is one of the better-known Peak-District rambles. If you do the easier circular walk around the hill, it spans three miles with the steepest bits helpfully peppered with stone steps (thank you National Trust!), making it perfectly doable for all ages. Be sure to take a peek in Blue John Cavern as you’re nearing the end - it’s well worth waiting in line to glimpse of the striking rare mineral it houses.

For those who don’t or don’t want to drive, you can start the nine-mile Longdendale Trail from Hadfield Station. The route is a real hit with fans of two wheels thanks to its smooth, flat cycle path and offers incredible vistas of Derbyshire’s moorlands, waterways and open greenery.

You’ll end at Woodhead Reservoir which is a truly worthy prize after all that exercise. We know what thirsty work it is, so do make sure you spend some time in Glossop, where you’ll find lots of other Lycra-clad cyclists and local ramblers in its friendly pubs, which serve proper ale and filling food.

The Tissington Trail follows a now-defunct Victorian railway and takes in several train workshops as well as the obligatory expansive countryside. Trains would run up and down this area supplying London with milk and limestone to local industrial areas and when it closed in the late 60s, the trail was born.

You can still go in the old signal box at Hartington Station. This Peak District walk is an especially great option for anyone with small kids who need the journey broken up via interesting sights and anyone with disabilities as it’s possible to get around the larger hills, just make sure you have a plan ahead of setting off.

Wildlife lovers should head straight for Ladybower Wood Nature Reserve, where you’re likely to spot an array of winged and pawed creatures from wood-warblers and blue tits to grouse and wild hares, as well as moss and mushrooms. In terms of scenery, this area boasts dense forest, vast moors, and of course tranquil water at Ashopton Viaduct and the Ladybower Dam.

If you’re coming via four wheels, you can park at the Upper Derwent Visitor Centre, which is a good place to investigate all the different route options and rent a bike if you fancy. For the most relaxing of the trails, stick to the bridleway that follows Ladybower Reservoir (it’s a simple circle), that way you shouldn’t have too much trouble navigating the sloping terrain near to the Hope Valley.

If you’re specifically looking for short walks in the Lake District, this one falls into that category. We recommend Bamford Walk for all ages and fitness levels and especially those with an interest in history and film - the dams in the valleys you’ll visit were used by Dr Barnes Wallis to test the bouncing bomb and The Dambusters was shot, in part, here.

This less-than six-mile stretch is easy up until Bamford Moor, where you will have to climb a little, but it’s well worth it for the incredible view at the top. The river crossing at Bamford Mill can be slippery in the winter months but is a real highlight.

Follow the now-defunct railway line towards Hayfield town and the River Sett for an idyllic trot that won’t take up much of your day. Along the way you’ll see the River Goyt, framed by the Torrs Millenium Walkway and if you’re in the mood for more, Bluebell Wood Nature Reserve. The trail stops at New Mills.

Another simple, circular reservoir jaunt that’s around five miles long, the Kinder Reservoir route is best started at Bowden Bridge and then you’re quickly on the Snake Path, which takes you through National Trust land and past the Twenty Trees (note: it’s still an impressive sight, but there are less than twenty trees in this iconic spot these days).

You can continue your walk up to the reservoir but do be warned little ones - pups and children! - might struggle. The panorama of the reservoir is of course, in our opinion, worth the sweat.

Fun for all fitness levels and four-legged friends, the journey from Ilam Park to Dovedale will be of particular interest to history buffs. Take in the Saxon detailing of Ilam Church and towards the end of this relatively easy route, the intricate fossils at the Stepping Stones. We’re getting ahead of ourselves though. You’ll also travel through quaint villages and be greeted by sheep grazing on Bunster Hill - go in the spring to see the lambs bouncing around!

To get to the top of Thorpe Cloud, which is a hill with a lengthy flat top, you’ll need to put in a bit of extra effort but then it’s downhill again and along a lovely river to Dovedale. Dovedale itself is a nature reserve made up of flower-filled meadows and enchanting woodland.

These are all good walks if you’re visiting the Peak District, but for something a bit different, try the Monsal Trail. It’s less than 10 miles and goes from Chee Dale to Bakewell, taking in several (well-lit!) tunnels en route. With breath-taking sights like Water-cum-Jolly, it’s easy to forget you’re in the UK!