If you’re a Skeet newbie, find out the equipment you need, how the game is played and skeet shooting tips to help get you started. 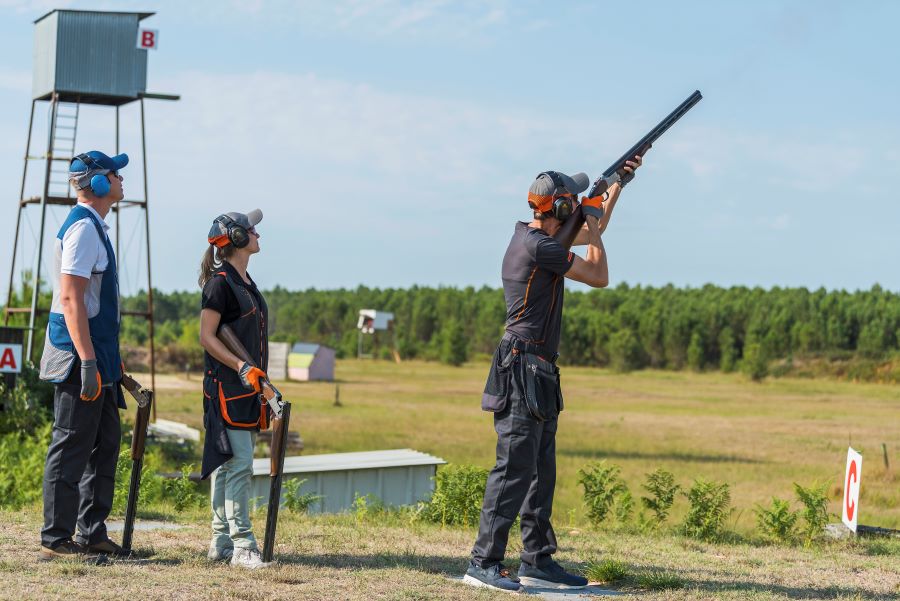 In skeet shooting for beginners, all you need is a gun, a shooting vest, sunglasses to protect your eyes and earplugs.

What are the rules?

The only rule is to hit the clay – known as the bird.

Where is it played?

Skeet is shot on a field in a semi-circle. There are 8 positions to shoot from. On one side you have a trap thrower who is set at a high elevated position and right below that is what is known as the first position or station 1.

At the opposite side of the field is another trap machine, set in a low position and the station next to that is position 7. The other positions sit along an arc between these.

How is it played?

The objective of the game, of course, is to break every one of these targets. The targets fly in a consistent flight path, what changes is the shooter’s position relative to that target’s flight path. In total there are 7 positions in UK Skeet (American Skeet uses 8). Positions 1 to 7 sit around the semi-circle. Station 8 in American Skeet, sits on a direct line between the high house and the low house. At position 1 you are presented with a high house target launched away from you, a low house target coming in across the field and then a pair of targets launched simultaneously.

You have your gun’ up’ ie already mounted in your shoulder and call the targets by shouting “pull”. Then you line up your gun and shoot them. It’s a very simple game!

Do you need a licence to take up skeet shooting?

No. But if you want to buy a gun, you need a licence for your gun. If you are a skeet shooting beginner, you will have to shoot under an instructor.

What makes you good at skeet?

As in other sports, you need lots of concentration to be good at skeet shooting and you need a good eye for the target. It’s a sociable sport, so much like golf etc, you can enjoy a catch up with friends whilst shooting.

So, if you’re a skeet shooting beginner, hopefully this has whetted your appetite. See you on the shooting range!