Find out everything you need to know about the different clay shooting disciplines in this quick guide. 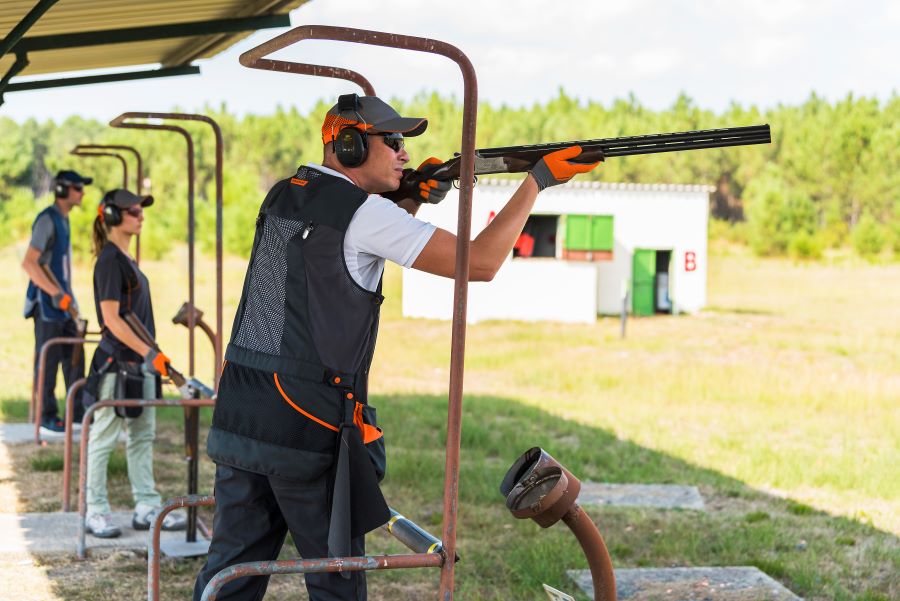 If you’re into clay shooting, you’re spoilt for choice, there are a number of different disciplines to choose from. We’ll tell you about each one so you can make up your mind as to which (or all) to try.
Trap disciplines

There are several different types of Trap shooting. The target is presented in slightly different ways in each and they have different rules.

The one thing that is same for all Trap disciplines is that, the targets are presented away from the shooter. They’re thrown from a Trap house around 16 yards in front of the shooter.

Common disciplines within Trap are Olympic Trap, Down the Line (DTL) and Double Trap.

This is an Olympic discipline – the clue is in the name – and the game consequently needs more complicated layouts that you normally get in UK shooting grounds.

In this game, you ‘shoulder’ the weapon before you start.

The trap has five groups of three throwers – one group for each stand. The throwers release the targets at different angles to a regulation pattern on the throwers command – pull!

Down the line (DTL)/European Trap

In this version of Trap, the shooting positions sit on a semi-circle around the thrower just 15 yards away. The thrower is automated this time and throws targets into a defined space from -30° to +30° either side of the centre line. Targets are thrown to a distance of 45 to 50 metres at a fixed height of around 2.75 metres.

For this discipline, you start with your weapon shouldered and get two cartridges per target. Each shooter takes a single target in turn, but without moving from the stand until everyone has shot five targets. Then you all move one place to the right, until you’ve completed a standard round of 25 birds. You get 3 points for a first barrel kill (hitting the target), 2 points for a second barrel kill and none if you miss. There’s a maximum of 75 points per round.

This one’s an Olympic discipline too. The set up is the same as Olympic trap and still with the weapon ‘shouldered’.

The only difference is that just one group of thrower is used. The three throwers are fixed and send two targets simultaneously at three different angles: -45°; 0°; +45°.

The shooter has one cartridge per target, so shoot carefully!

There are English, American and Olympic version of Skeet shooting. All involve close-range, crossing targets which are shot from eight different positions along an arc between two trap houses. There is a set sequence of targets thrown from both a high and a low house, including doubles. It’s a pretty simple game and the one and only objective of Skeet is to hit the clay – known as the bird. You start with your weapon ‘unshouldered’, unlike Trap. So the shooter only shoulders the weapon when the target is released.

In the Olympic version of Skeet, the targets are obviously faster and the rules differ slightly.

This discipline is intended to simulate natural game shooting, so it means lots of throwers are involved as well as a number of natural countryside hazards. A typical 100-targt competition may be shot over as many as 10 or more stands. Targets are thrown in different ways as though razing, driven, crossing, half crossing, rising or falling as though you were shooting rabbit, pheasants, woodcock, duck, partridge. They might be thrown from behind trees, against open skies, in woodland, in shrubbery or other natural obstacles. It can be as adrenalin-filled as the real sporting shooting.

You shoot with your weapon ‘unshouldered’. Sometimes the targets are presented as simultaneous pairs (two in the air together) or ‘pairs on report (when the trapper releases the second target the moment he hears your first shot). You’ll get two shots per single target and conversely a single shot for a double. Go figure.

Compaq is a mash-up of two disciplines; Trap and sporting clays. It has the stands of universal trap with a frame that limits the angles targets can be thrown at. The trajectories of the targets; the way they are thrown resembles Sporting clays in that they can come from any direction at any angle so long as they are within the zone in front of the shooter. Like Skeet and shooting clays, you start with your weapon ‘unshouldered’. You’re allowed two cartridges for single targets and a single cartridge for doubles.