Data on England's most popular football clubs according to social media! 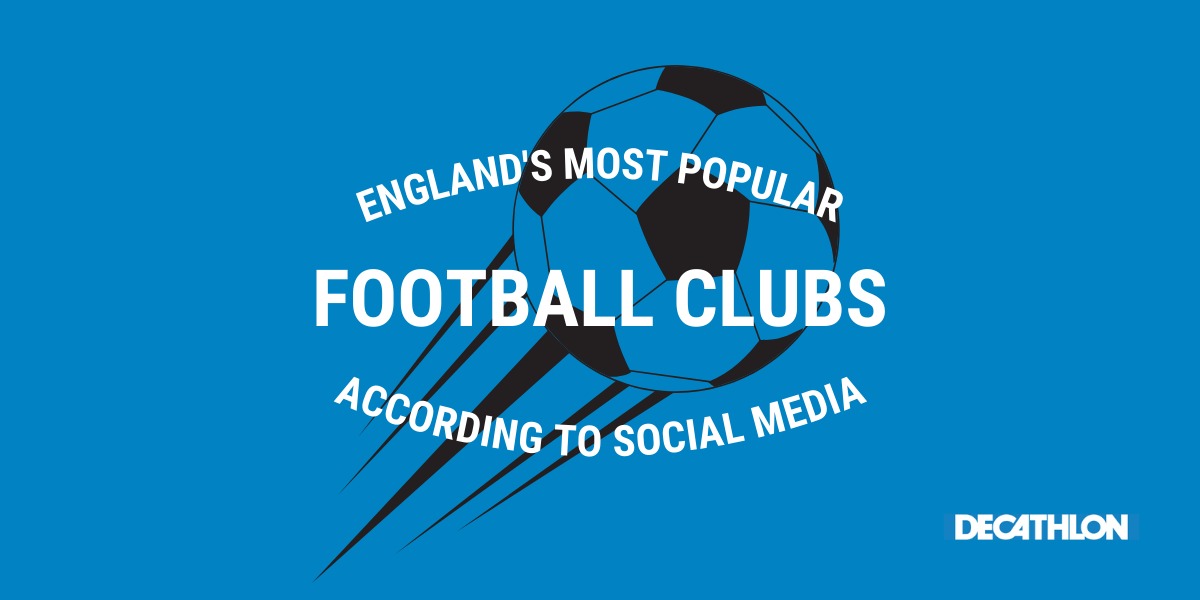 You can always debate who the best English football team is, but who is the most popular? To settle the score once and for all (or, at least for this season), we gathered data on the number of followers that each team - from the Premier League down to League Two - has across social media platforms. Crunching the numbers from Instagram, Facebook, Twitter, Tiktok, and Youtube for every club, league and region, this is what we found. 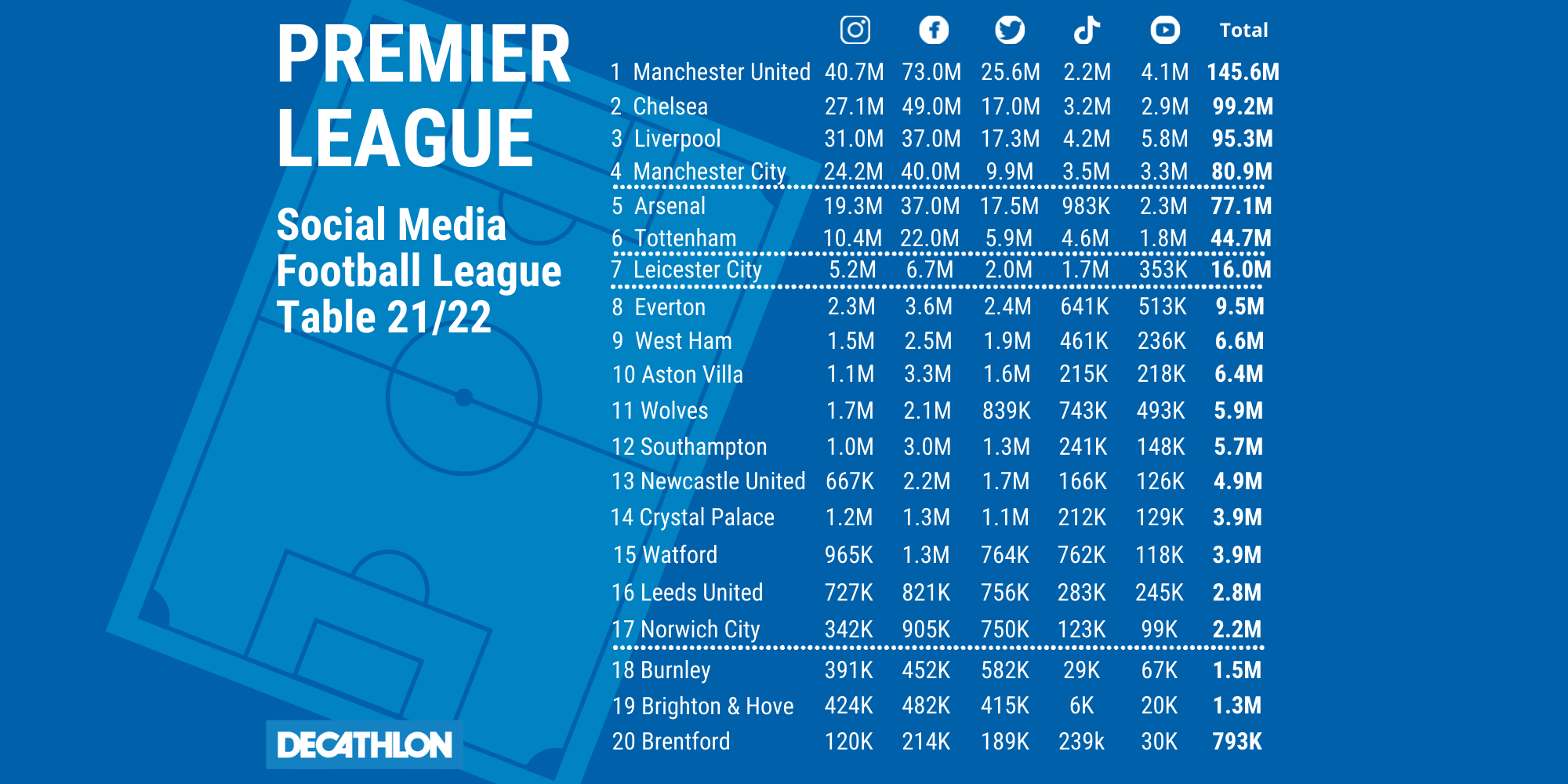 It’s no surprise that Manchester United topped the Premier League. The recent return of Cristiano Ronaldo boosted United’s Twitter following by 750,000, showing the Portuguese superstar can even help a club like United grow.

Chelsea, Liverpool, and Man City complete the top-four, with Chelsea and City’s recent domestic and European success undoubtedly aiding their popularity around the world. Both clubs have been on decade-long runs of signing world class talent and this hasn’t slowed down this summer. This will have been a big pull for the two clubs in gaining more global appeal.

Chelsea saw their Twitter get boosted by over 300,000 new supporters after splashing the cash on Romelu Lukaku and Saul Niguez, showing that a positive transfer window really does get fans on board.

Man City continue their rapid growth globally after signing England star Jack Grealish for a record £100 million, adding 250,000 fans to their ever-growing online presence. The blue side of Manchester have gone from 8 million followers to almost 11 million in just over a year, showing that they fully expect to be a global powerhouse within the next few seasons.

Contrast this with Arsenal who, after an underwhelming season, only gained 50,000 this month - a number of fans that wouldn’t even fill the Emirates Stadium. Across the road in North London, Gunners’ rivals Tottenham Hotspurs had a contrasting transfer window and start to the season. After beating Man City in the opener, keeping Harry Kane for another season and plugging gaps in the market, they only grew 44,000 for August.

One of the most interesting finds came in the huge fanfare of Leicester City. Despite only getting promoted to the Premier League in 2014, they have utilised their Premier League win in 2016 and their Champions League place in 2017 to become one of the most followed clubs outside the top 6. 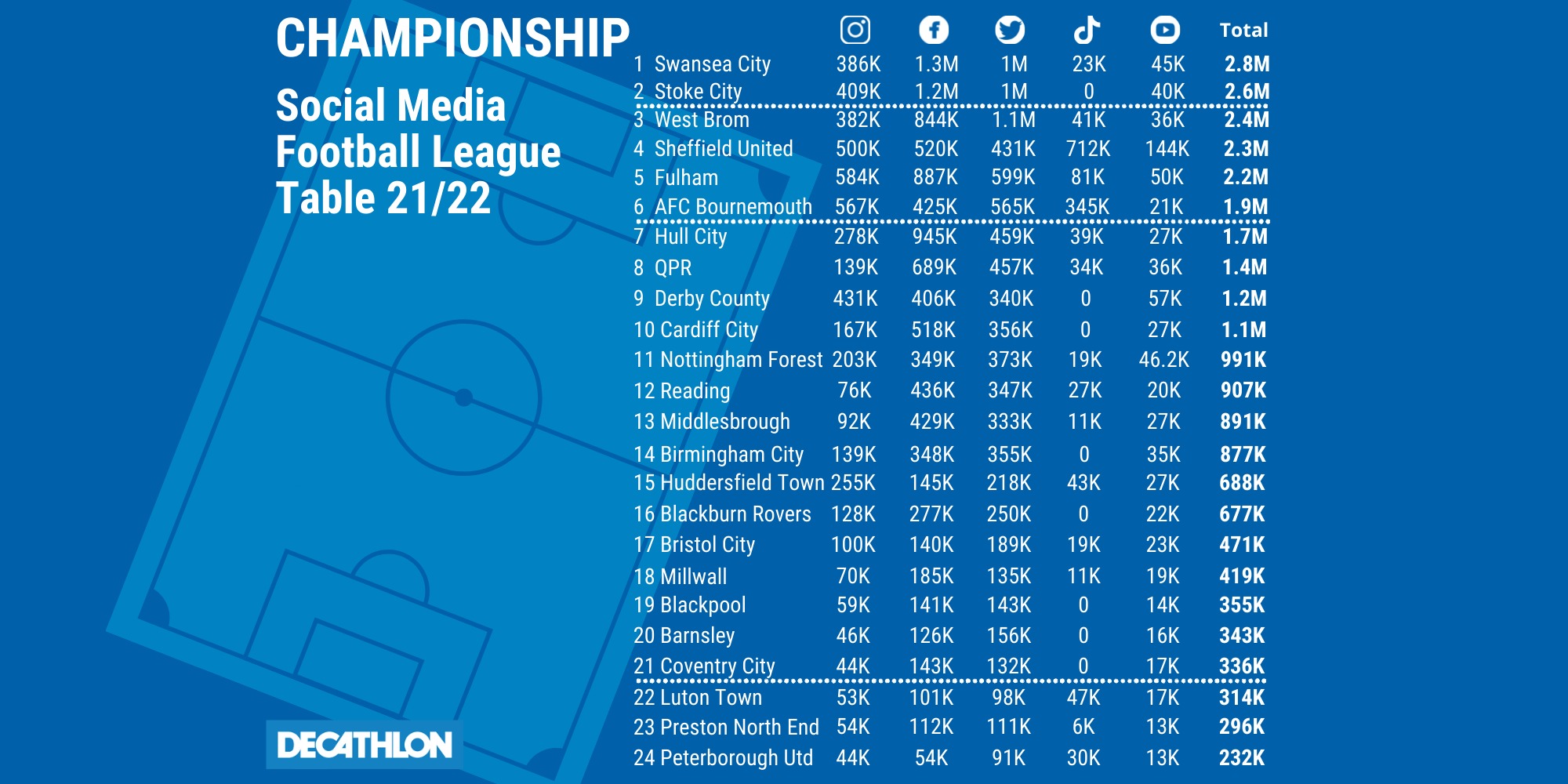 The social following is much more broad and balanced in the Championship, with a lot of surprises found at each end of the table.

Swansea shocked by gaining top spot, with a couple of strong seasons in England’s second flight boosted by their years spent in the Premier League. Stoke City and West Brom filled out the top three, and that’s no surprise after the perennial Premier League outfits only recently dropped down a league.

It was interesting to see how these clubs used different platforms to grow their following around the world. The clear front-runner in this field came in the form of Sheffield United, with their 712k and 144k followers on Tiktok and YouTube, eclipsing the whole Championship and most Premier League clubs too. This is a rapid rise for a club that was in League One only four years ago.

Outside the top 6 there are no real shocks but bragging rights for Derby County who pip their local rivals Nottingham Forest by 300k, along with sad times for Birmingham City who become the least followed club in… Birmingham. 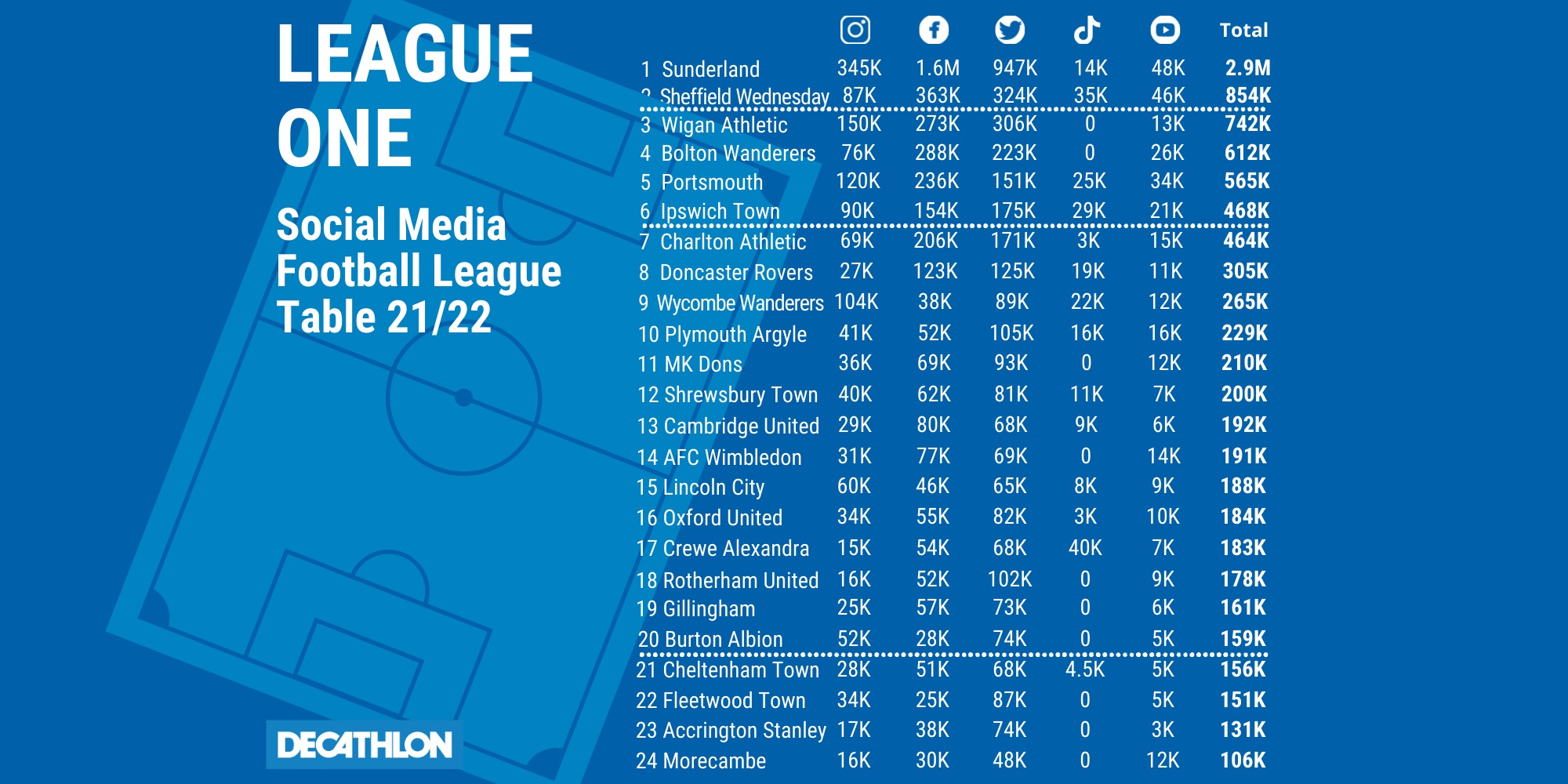 The clear front-runners in League One are the Mackems, as Sunderland retain their die-hard Wearside support despite dropping from the top-half of the Premier League to League One. Sheffield Wednesday have retained solid support too, despite not managing to break into the Premier League like their South Yorkshire rivals.

Crewe Alexandra earned a special mention for their presence on Tiktok. The Cheshire club has 40k followers on the platform, while most League One clubs don’t even have an account. 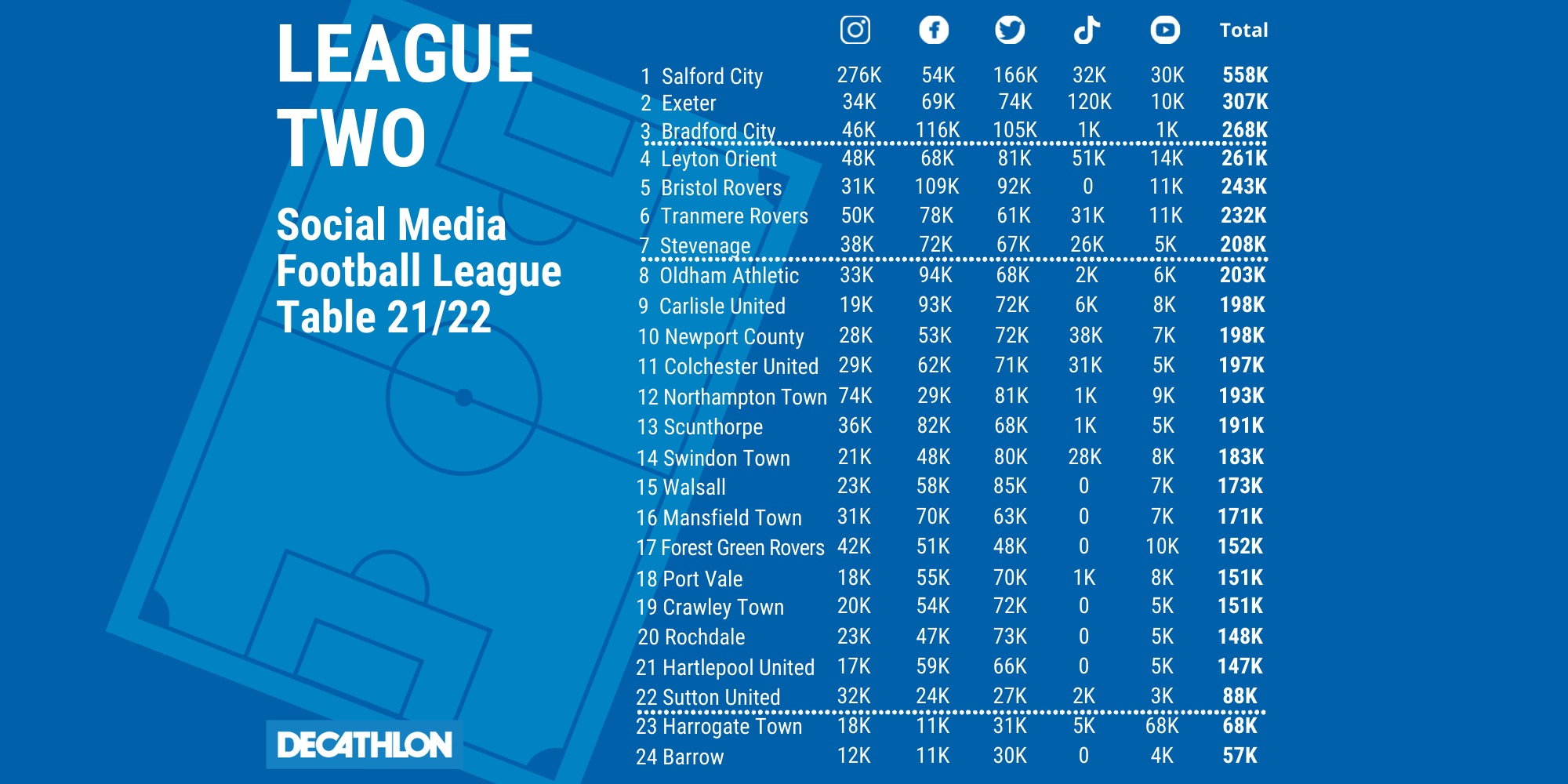 The ex-Man United player group of Beckham, the Nevilles, Giggs, Scholes and Butt investing in Salford City is certainly paying off, as they have rocketed to the top of League Two in popularity. They are ahead of long-time established professional clubs like Bristol Rovers, Oldham Athletic and Newport County, despite being non-league only a few seasons ago. Exeter boast huge Tik Tok numbers despite being in the bottom flight, with their 120k following ranking among Championship clubs far above their on-the-pitch ranking. Bradford City, Tranmere Rovers and Leyton Orient find themselves at the top end of the table and will be hoping to add to their following with a promotion at the end of the season. 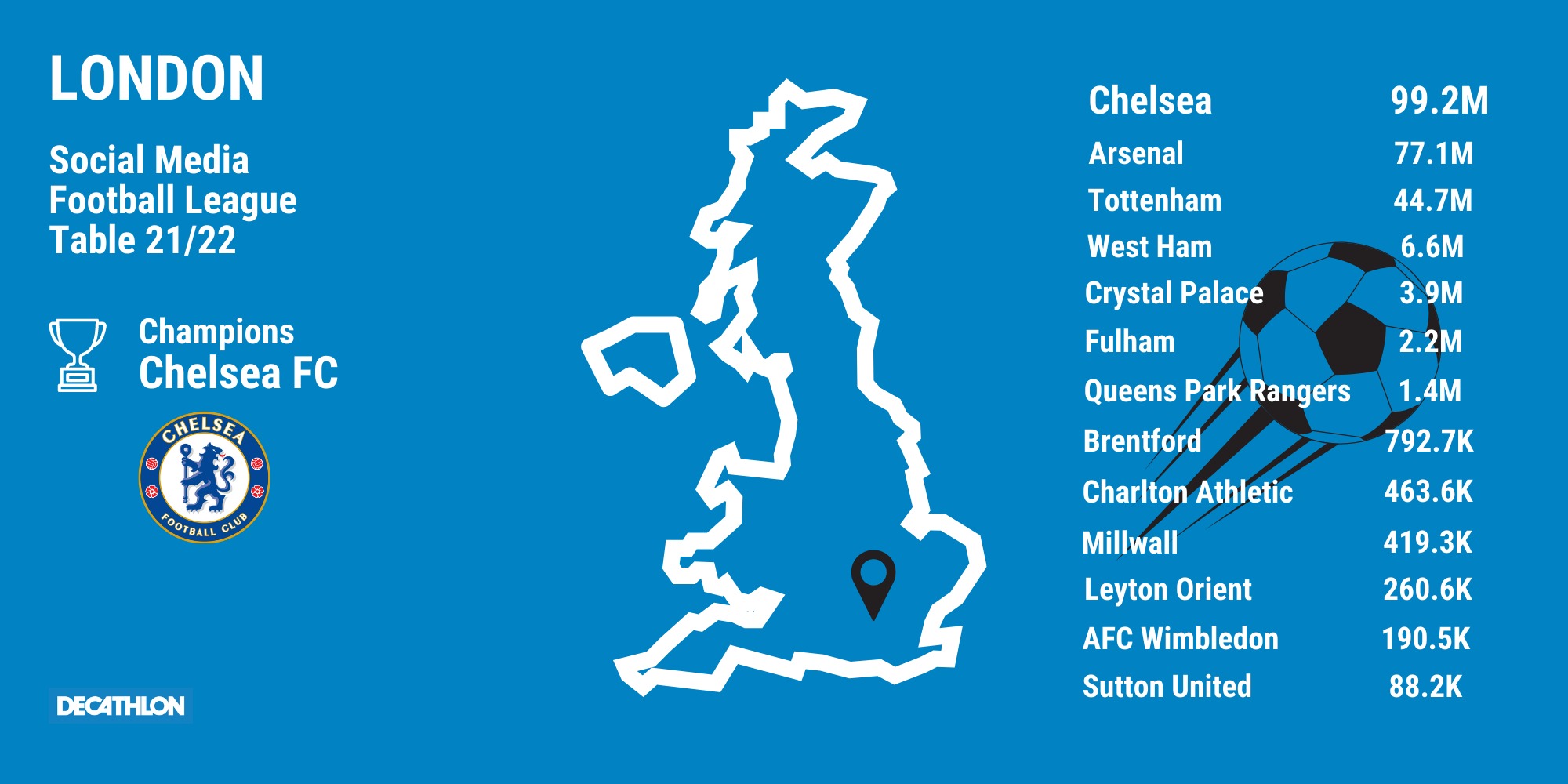 Chelsea dominate the capital after knocking the Gunners off their perch. The Blues won the Champions League last year and have grown from strength to strength since Roman Abromavich’s investment in the early 2000s. They are close to breaking the 100 million mark, and seem to be reaching new heights on the pitch too.

There’s still good news for Arsenal, as they take the 2nd spot in London and eclipse their local rivals by a huge 33 million margin. Spurs fans will still be reminded to ‘mind the gap’ for a while longer, although that seems to be closing quicker on the pitch than off it.

The rest of the London clubs are closely matched, with West Ham (6.6M), Crystal Palace (3.9M), Fulham (2.2M) and QPR (1.4M) battling to catch up with the top 3. Despite Brentford’s promotion into the Premier League, they are yet to break the 1 million mark. After beating Arsenal in the season opener, it can’t be too long till they make a name for themselves. 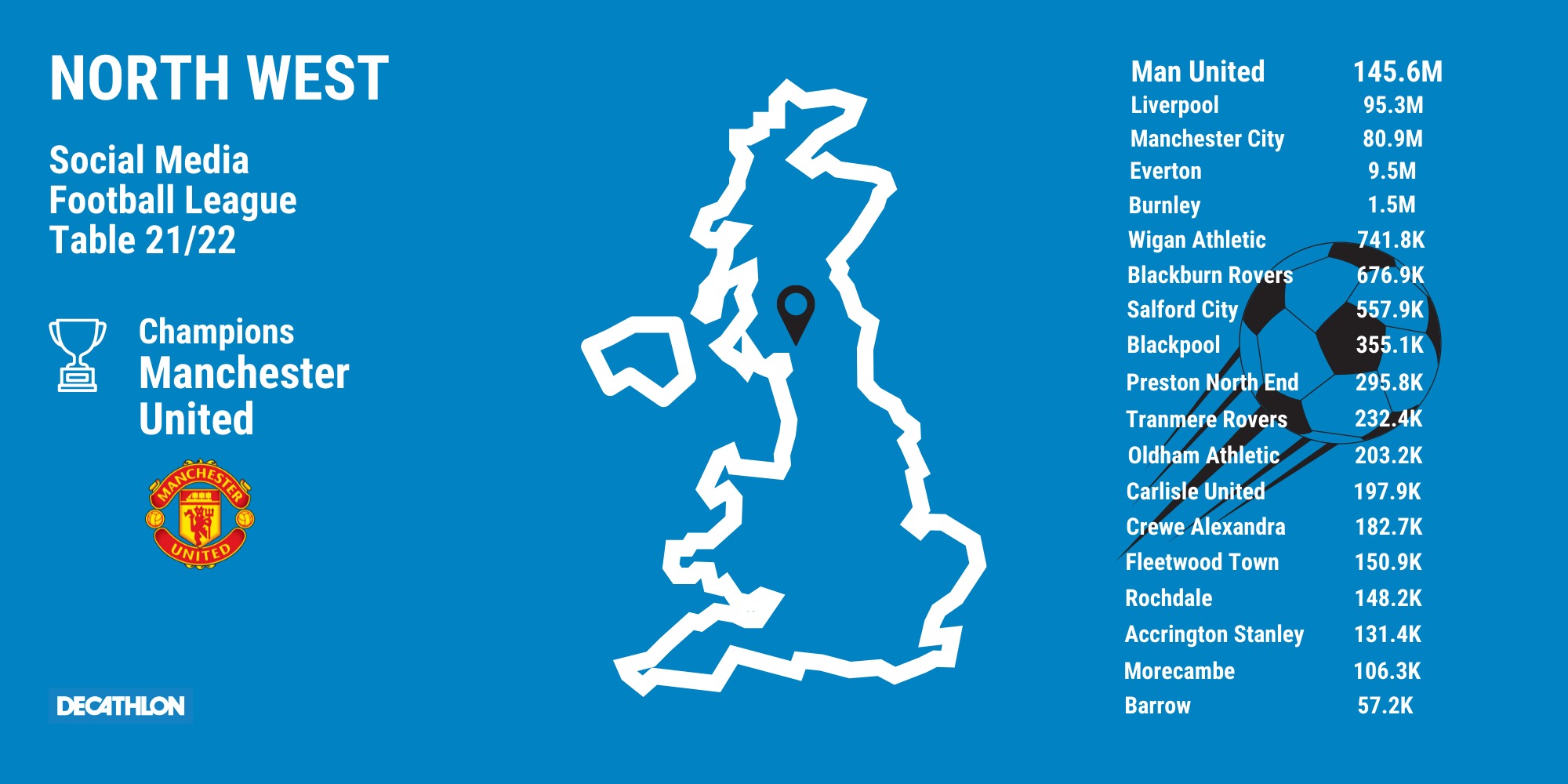 Despite falling behind over the years to their well-financed neighbours, Man United still dominate in the social rankings against Manchester City. The Red Devils boast almost 60 million more followers online compared to City, showing that despite losing dominance on the pitch in Manchester, they are still as powerful as they were in the Fergie era on social media. 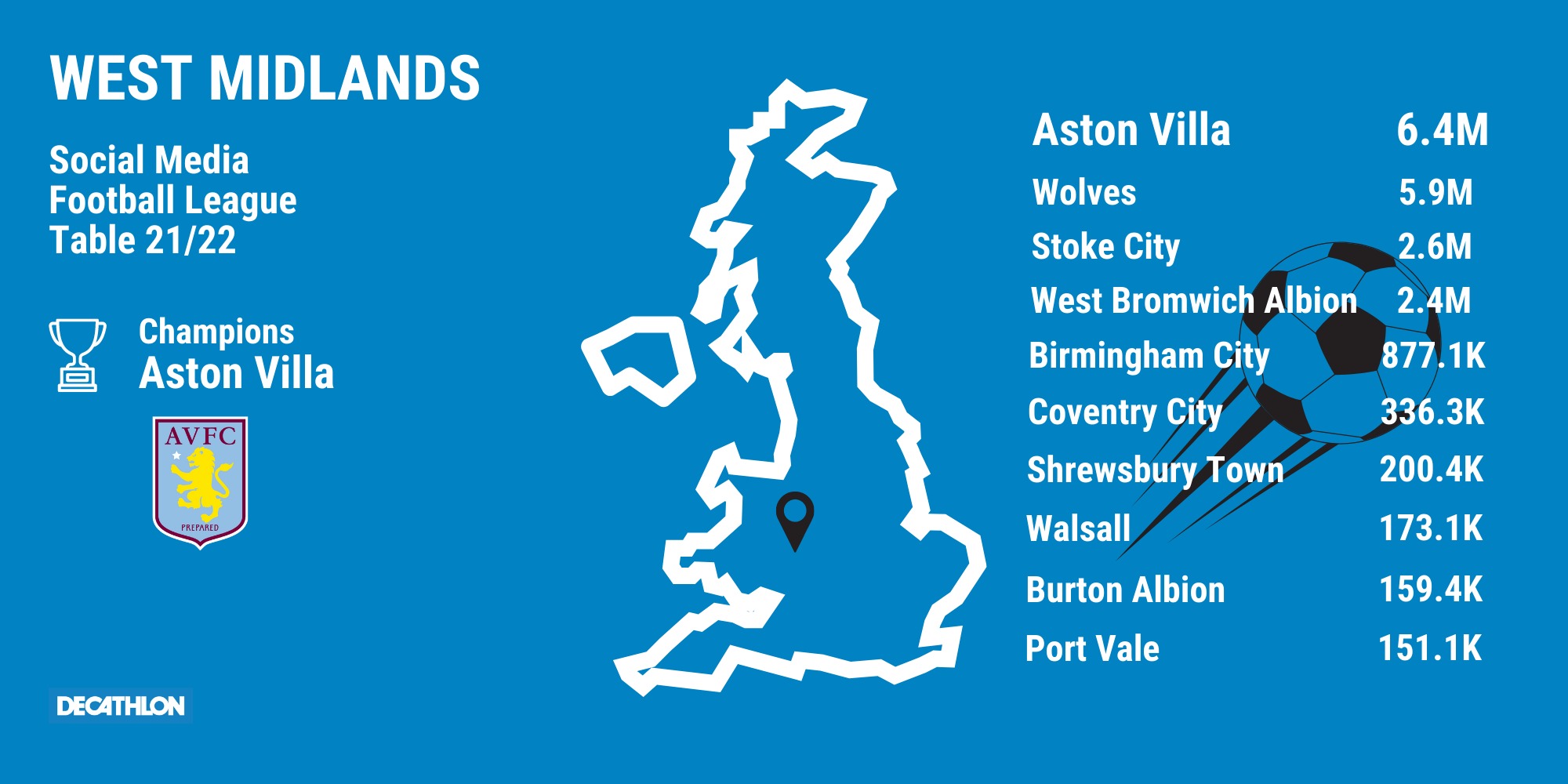 Wolves rapid rise in popularity has seen them come within 500k followers of perennial Prem stalwarts Aston Villa. West Brom sit in a comfortable third position, seeing their popularity dip after a couple of yo-yo years in and out of the top flight. Birmingham City have dropped hard from their years of Europa League football and League Cup success, now battling it out with Coventry City, with both under 1M followers. 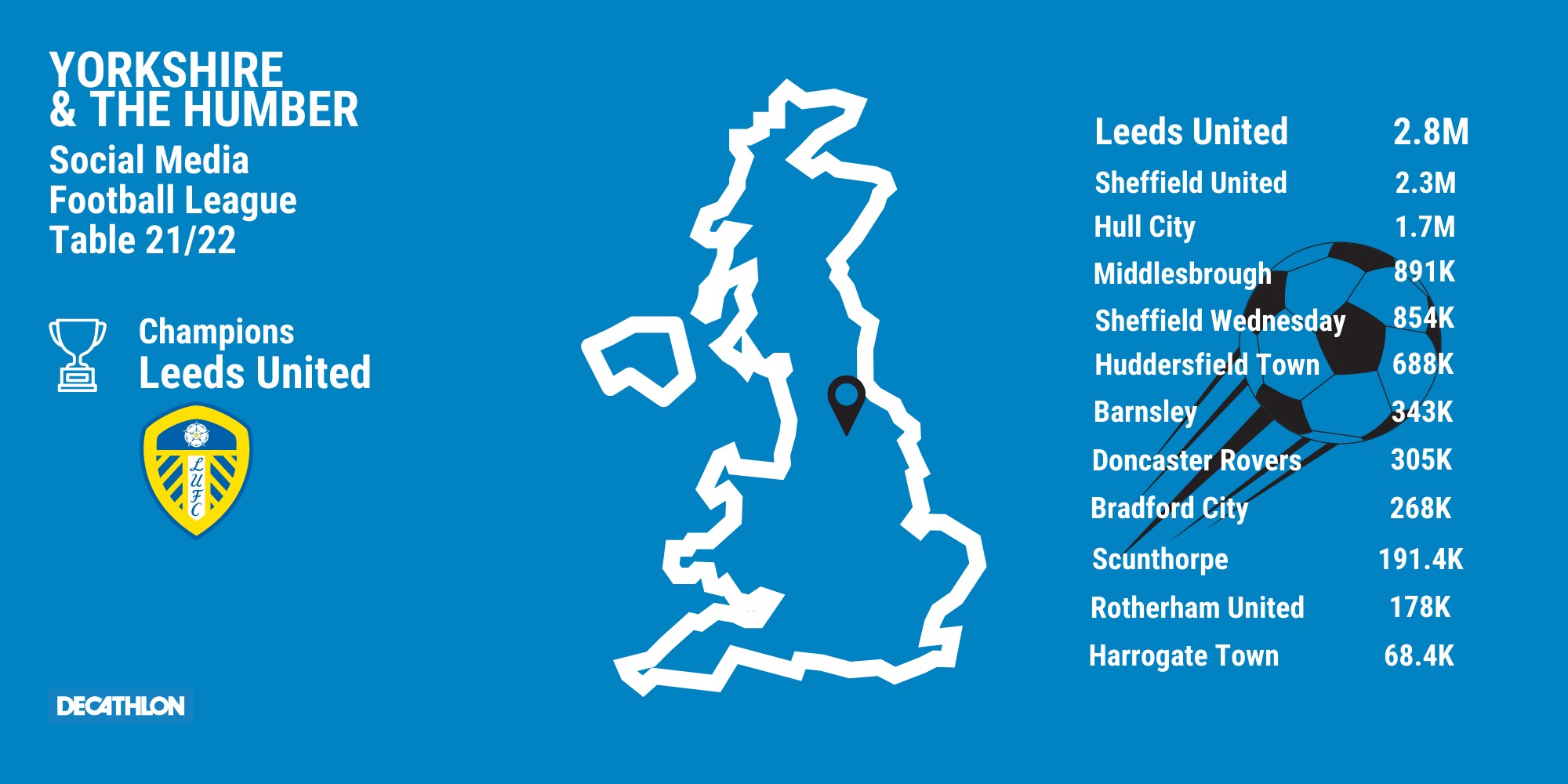 Marcelo Bielsa’s impact at Elland Road alongside their long-lasting and world-renowned fan base has seen Leeds become the most popular club in Yorkshire. This will come as a shock to some of the Sheffield United fans who saw their club gain huge plaudits after rising from League One to the Premier League under the now departed Chris Wilder.

Not far behind the top two clubs (who have 2.8M and 2.3M respectively) are Hull City (1.7M), Middlesbrough (900K) and Huddersfield Town (700K). All three have tasted the riches in the Premier League but were unable to capitalise on being in the most-watched league in the world.

Left in the Yorkshire dust are Rotherham (200K) and Sheffield Wednesday (900K), both unable to reach the heights of their rivals by playing Premier League football. This represents a huge decline from the highs of the Premiership for Sheffield Wednesday, as the Owls were in the top flight until 2003. 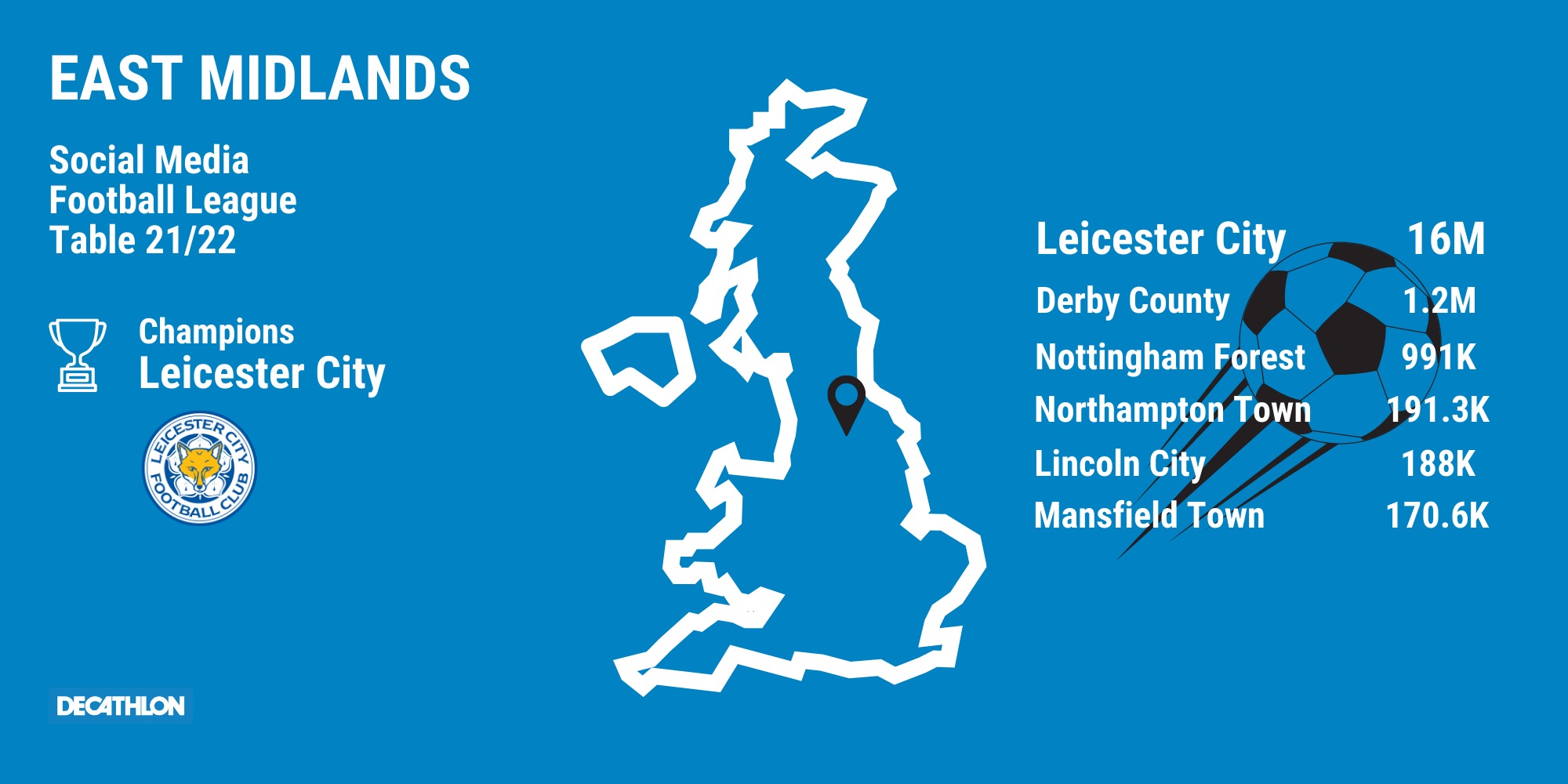 LEICESTER MOST POPULAR IN EAST MIDLANDS BY 13M FOLLOWERS

One of the bigger shocks came in the East Midlands, as Leicester eclipsed the rest of the clubs in the region by a huge margin. After Premier League title success and two spells in Europe, they have seen their support sky-rocket to 16M, a long way from the days of Championship football under Nigel Pearson.

Derby County fans will be happy to see them pip rivals Nottingham Forest to the second-place spot, but both will be unhappy with how far they lag behind Leicester. Each club has had history in the top-flight and even European football, but years spent in the Championship have left them with 1.2M and 1M in Leicester’s shadow.

Lincoln City have seen their rise to League One from non-league coinciding with a rise to almost 190K followers, taking over Mansfield Town who have stagnated in the bottom two leagues and as a result have 170K. Northampton Town are the best of the rest, bordering close to 200K and have been on the cusp of dropping into non-league territory. 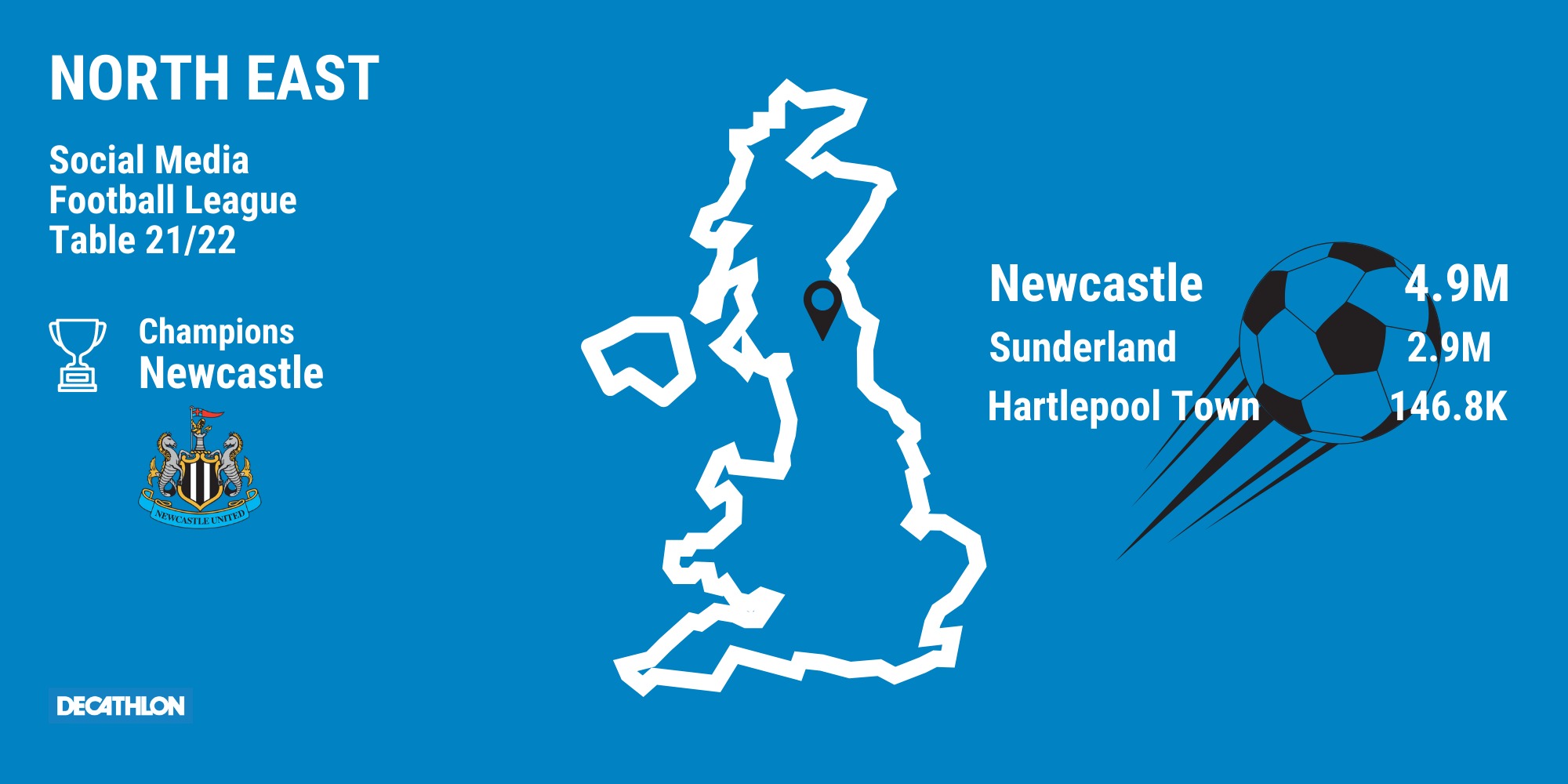 NEWCASTLE HAVE BRAGGING RIGHTS IN THE NORTH EAST

After plummeting down English football standings, Sunderland have seen their support dwindle to almost half that of their city rivals Newcastle. Their 2.9M followers have seen them go from a strong Premier League side to a League One club within a couple of years, and a Netflix documentary did little to boost their following around the globe.

Newcastle had a few years of bouncing up and down to the Championship but now find themselves being consistent Premier League occupants, holding onto almost 5M followers. 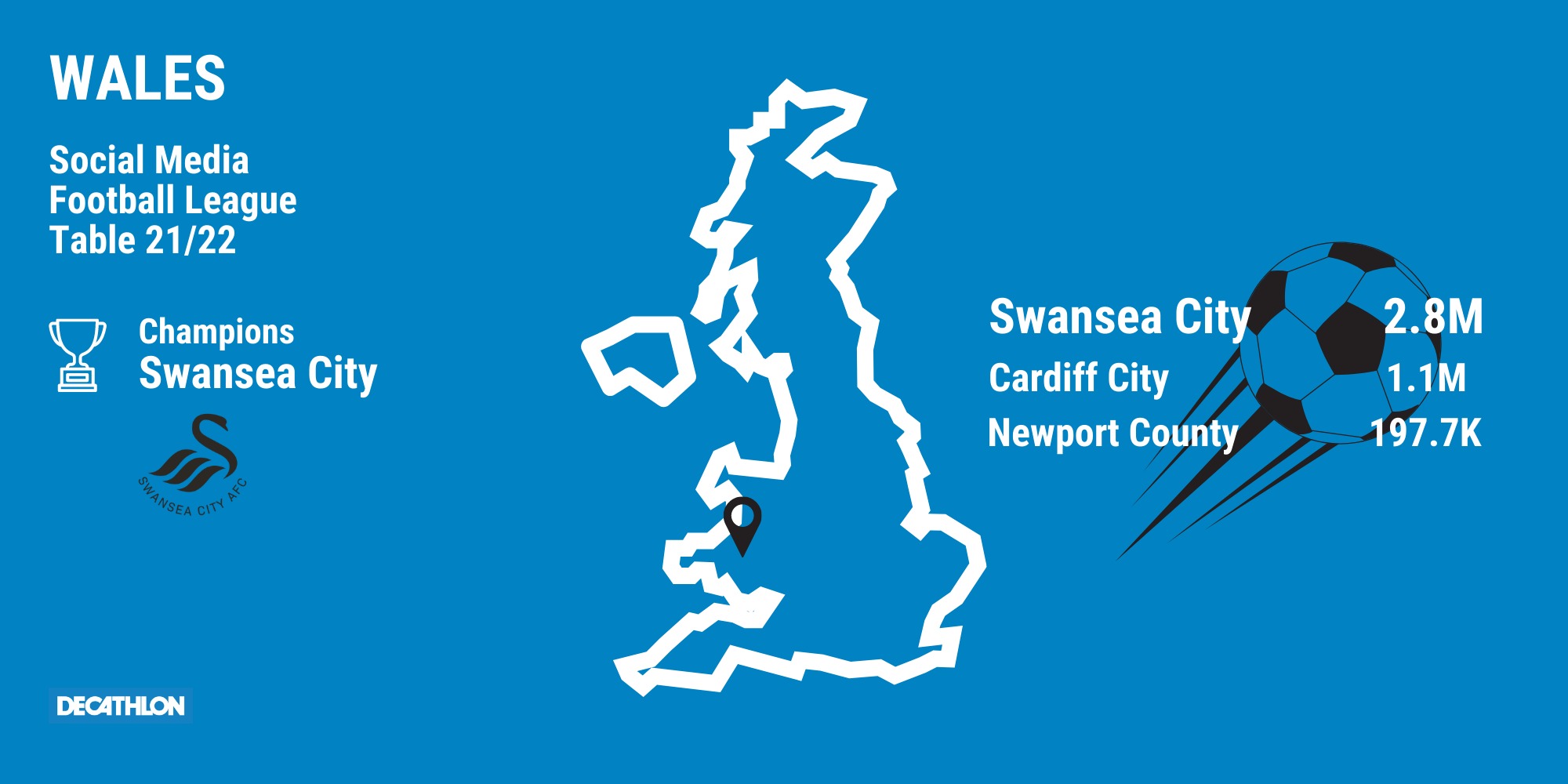 Swansea lead Wales with 2.8M followers, despite dropping to the Championship after a long tenure in the Prem playing scintillating football and reaching European heights. Cardiff have flirted with Premier League football but were unable to stay up for more than a season, thus finding themselves behind the Swans. 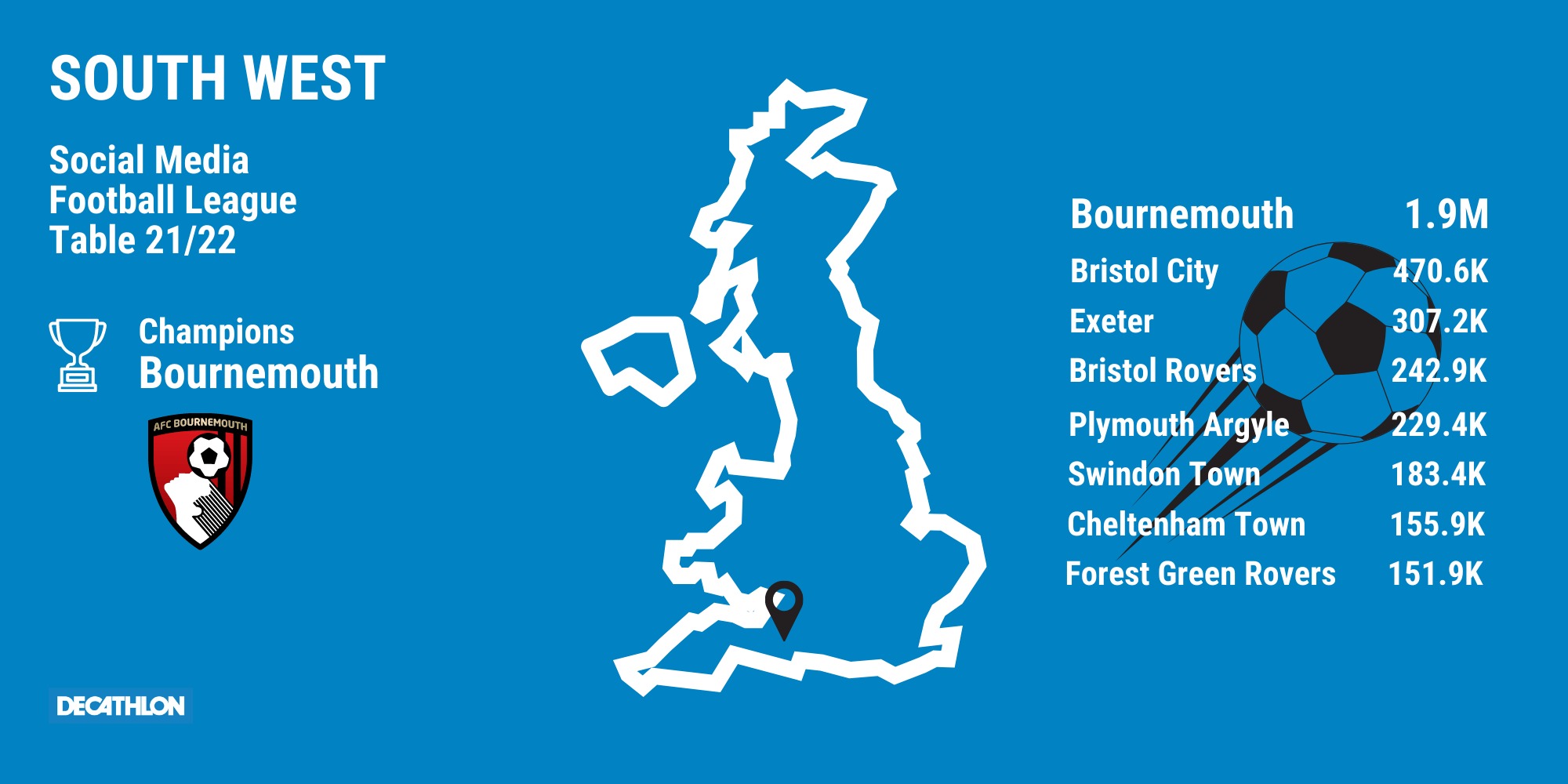 THE CHERRIES HAVE THE FRUITFUL FOLLOWING IN THE SOUTH WEST 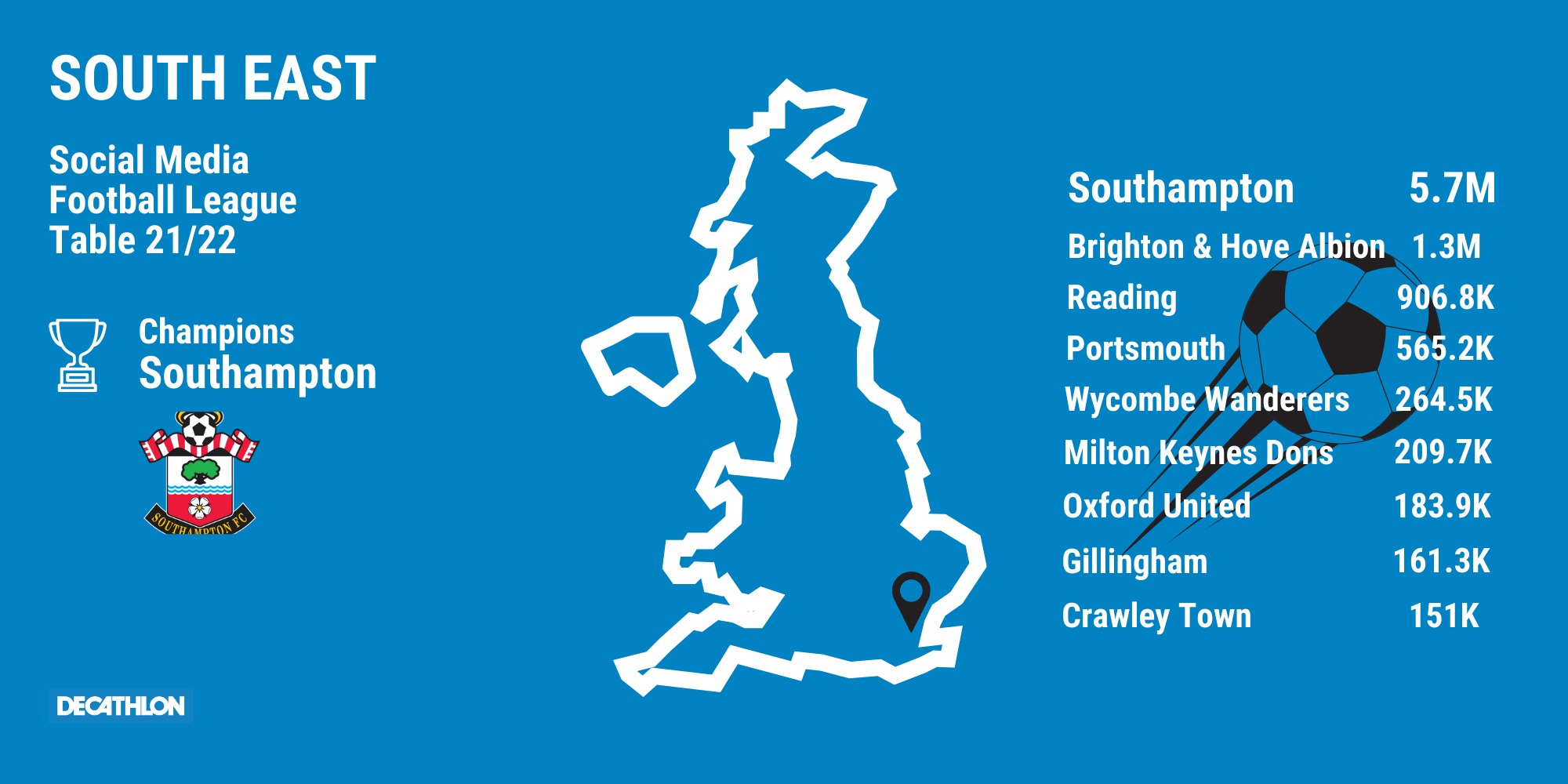 THE SAINTS HAVE THE MOST DEVOTED IN THE SOUTH EAST

Southampton (5.7M) lead the way in a clear race as the most successful club in the South East after a long tenure in the Premier League coupled with seasons in the Europa League and multiple FA Cup and League Cup runs. Brighton came next with (1.3M) after a few seasons in and out of the Premier League, with the Seasiders now playing in the Championship. Reading are just outside the million mark with 900K, having been out of the Premier League for almost nine years now. Despite Wycombe Wanderers rapid ascent from League Two to the Championship, the press that followed was unable to take them beyond 260K. 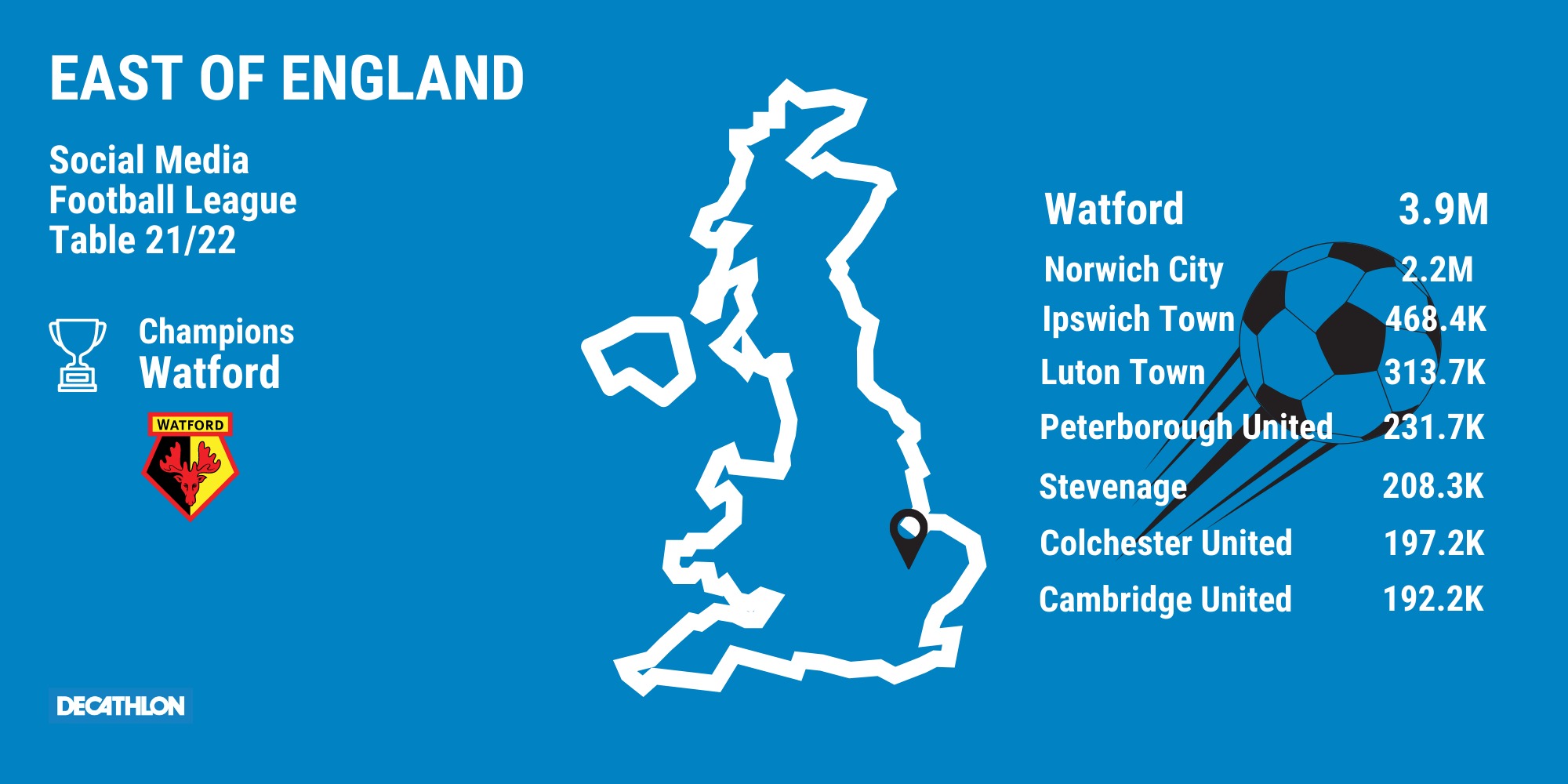 Watford take the crown of the most popular in the South East after pipping Norwich City by 1.7M despite both clubs yo-yoing from the Premier League to the Championship in recent times. Watford have had a strong history of being in the top flight and Norwich found themselves cut adrift until only recently. Ipswich Town lag behind their East Anglian rivals after being unable to break into the Premier League, while Peterborough edge the followers of Colchester United and Cambridge United despite all three hanging around the mid-tier levels of English football.