How to Do Kick-Ups & Improve Ball Control (Plus More Tips!)

How to do kick-ups with a football and why you should do them. Learn to flick, roll and tap it like the very best with our rundown. 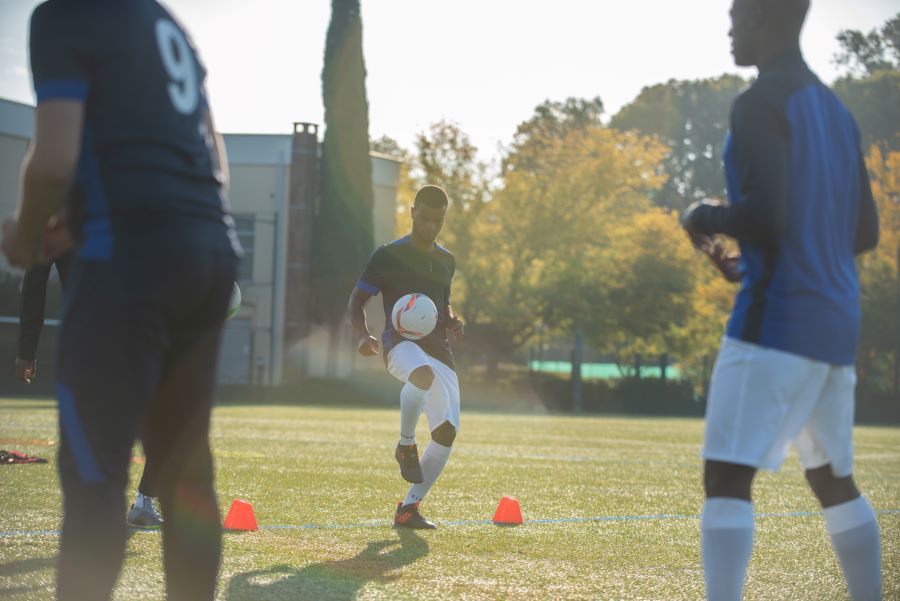 The kick-up. The art of stopping the ball from hitting the ground using various parts of your body. Mostly with your feet, but also using your thighs, chest, and head. Also known as the kick-up.

Chuck someone a football and the first thing most people will do is to try a few kick-ups. Tap, tap, tap. It’s almost a subconscious act. But not many will get beyond a few kick-ups. Why? Because it isn’t easy.

Why Master the Kick-Up?

On the continent, keepy-uppy is the staple of the star player signing ceremony and there’s a reason for that. Usually, a player will be ushered onto the pitch, maybe into the centre circle, where they’ll spend a few minutes effortlessly tapping the ball up in the air, making it look like it is as easy as breathing.

This isn’t just a player idly killing time, it’s a message to the fans: here is a big player with big skills who is going to have a big impact. It doesn’t always work out that way, but at that moment, anybody who has tried to do kick-ups knows what this nonchalant display means.

Find a video of Neymar’s keepy-uppy skills. The Brazilian superstar is famous for his tricks and flicks, and he makes kick-ups look like the easiest thing in the world. The same goes for his one-time Barcelona teammate Lionel Messi. Doing kick-ups is a badge of honour.

Neymar and Messi are good but who is the best? Who is the granddaddy of kick-ups? It has to be Argentinian legend, Diego Maradona. There is footage of him showing off incredible kick-up skills not just with a football but with a tennis ball and a golf ball. Now that is an outrageous skill. How could he do it? Well, as a child, he ran errands doing keepy-uppy with an orange. It’s all about practice.

How to Do Kick-Ups For Beginners

It’s a tricky skill, but getting pretty good at kick-ups is something you can achieve. Practice makes perfect. Or will at least show signs of improvement.

So, how do you get your keepy-uppy game on? Here are three basic steps to get you started:

1. Using your stronger foot, kick a ball so that it comes up to your waist and catch it. Repeat until you get a good, accurate motion going.

2. Repeat step 1 with your weaker foot. Try to get the ball to come to the same height at your waist. Repeat until the motion is consistent and accurate. Mix up the action using both feet.

3. Next, try using both feet, one after the other, and then catching the ball. Once you’re comfortable doing it with both feet (two kick-ups), try it with three. And then four, five, six, etc.

Keep practising - a keepy-uppy net is useful to have - and soon you’ll be rolling out the kick-ups like a pro. As you practice, you can try controlling the ball with other parts of your body. Start with your thighs because that’s the easiest.

How Many Kick-ups Should I Do?

The world record held by former professional footballer Milene Domingues stands at 55,198 touches. However, for those just starting out, it is definitely a case of quality over quantity. Getting a good amount of kick-ups under your belt is hard enough, trying to keep count whilst doing it is a little unnecessary for beginners. Having said that, once you feel comfortable about the control of your kick-ups, you could start by aiming for 50. Once you’ve done that, add another 25 on, and so on.

Why should you learn to do kick-ups with a football?

It’s a good question because you don’t really see players doing kick-ups in games. But what you do see is them using the close control ball skills and

stamina that doing kick-ups teaches you. And these skills are very important.

While it all falls under this title, there are several detailed benefits with kick-ups in terms of ball control. The first of these is developing a consistency with the ball. A repetitive and engaging exercise such as kick-ups is great for developing a focus that’s second nature. In keeping the ball up in the air, you will also perfect your touch. It may start off feeling like you’re just stopping the ball from touching the ground, after a while, you’ll start finding a rhythm, which gives you confidence in your control. It’s also great for improving your control for your weaker foot, as completing a large amount would be very difficult just using one strong foot. By improving this weaker foot, your control will be more balanced, and may even help with passing and volleying on that said weak foot. It’s also great for control when receiving passes, as you are essentially passing the ball to yourself with each kick. The exercise also teaches you how to naturally open up your body, which is another vital component of good control.

Also, doing kick-ups is good exercise – you’ll get a sweat on. Playing football as a whole is really good exercise – a great workout for your whole body. You get cardiovascular exercise, you work on your quads, hamstrings, and calves and, because you use your arms a lot, you tone your upper body.

The Real Reason You Should Do Kick-Ups With A Football

But it’s not just about the exercise. When you get the kick-ups right and get a good flow going, it makes you feel like a pro. A fleeting moment of wonder when you feel like you’ve got it, that you’re up there with the best of them, shoulder to shoulder (and foot to foot) with Neymar, Messi, Kane, Sterling, et al.

Feel confident with your kick-ups? Why not try out these games...

Another sporting hybrid, and one that's played at professional training grounds across the world. It’s also a game that the whole family can get involved with. To keep the game under control, it may be a good idea to not raise your net too high, to stop players feeling the need to smack the ball as high as possible.

What you need: A football, a net, or something that resembles one(this could be a row of chairs, a piece of rope tied between two chairs, or even a piece of raised wood). Needs at least two players.

Once your kids have mastered that, (and after removing breakable items) why not change the rules to no bounces allowed?

Great for: Agility and ball control.

One Touch, One Bounce

A game that can include as many people as you like, and one that can bring competitiveness out of the best of us. Although by its very name it seems the opposite to kick-ups, as the former requires you to keep the ball off the floor. However, knowing when to let the ball bounce and when to connect with it on the full is important, so it’s actually a good game to track your progress, once you feel comfortable enough. There’s also the option to simply ‘one touch’ which would essentially be a communal kick-up session.

What you need: A football and at least one other person.

How to play: Although the game can take many different forms, the most regular version involves players standing in a circle, with one person beginning the game by kicking the football up in the air. The ball is allowed to bounce once, as the name would suggest) and then another player must run and kick the ball in a way that sets it up for another player. This continues around the circle with each player taking a touch until one person makes a mistake. Again, in the regular version of this game, each player has five lives, and once those five lives are lost, they leave the circle. While part of the game is about making it difficult for opponents to be able to return the ball, there is also a chance that the person kicking the ball can lose a life if their return is not considered fair enough.

Combining aerial ball control with shooting and heading practice, this is a fun game that makes players think about how they put the kick-up skills into practice.

What you need: A football, goalposts (or something that resembles a goal), and at least three players.

How to play: With at least two players outfield, the goal of the attackers is to score five goals past the goalkeeper. However, it must only be from a header or volley, and the football is not allowed to touch the floor before the shot is taken. If a header or a volley is caught on the full by the goalkeeper, or it goes over the bar (or just too high if you are not using real goalposts) the player who last touched the ball is in goal. As soon as a player loses five lives, they are out of the game. If you are interested in making the game harder, there is also the version with a header counting as two lives and a goal scored with a knee will bring the keeper down to their final life.