How to Improve Your Climbing

Whether you’ve just started or you’ve seen sending for years, accelerating your growth in climbing is important. 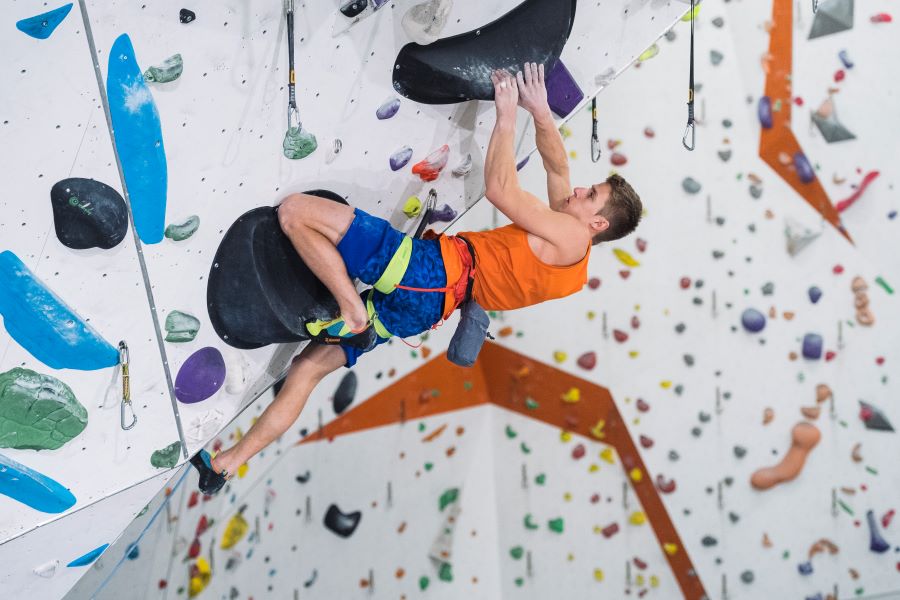 These are the exercises you’ll want to do to start developing strength and fitness that climbing requires. Just remember to consult with your doctor before you begin!
How to improve climbing strength

Three days a week perform three or four sets of each of the below strength exercises.

Push-up with a twist

Do a traditional push-up and on the up section, raise your right knee to your right elbow, alternating sides each rep. This extra step strengthens your core. Do 14 push-ups each set.

Grab a pull-up bar with an overhand grip, slightly wider than shoulder width. Pull your body up until the top of your chest reaches the bar. Do 10 pull-ups each set.

In a regular plank position, lift a leg off the ground for 10 seconds. Do 40 second sets.

Use dumbbells in each hand. Set your feet wide in a push-up position. Lower down and as you push back up, row one elbow back, pulling the dumbbell to the rib cage. Do the other side. One set is six to 12 reps.

How to improve climbing grip

You need strong fingers to climb harder. You’ll need to grab a hold for five to ten second. Much of your finger strength comes from climbing on holds that are hard for you fingers, like bouldering at your limit, but this isn’t your most effective way to improve.

Hangboarding is your best bet for improving your climbing grip. To warm up before you begin, climb for 30 minutes, ramping up the intensity as you go.

All hangboard exercises are based on repeating hangs on small holds for about ten seconds, then resting for the same number of seconds or more. Repeat three times. That’s one set.

To begin, try seven different types of holds, from crimps to pockets to slopers to jugs. Between each set, rest for two minutes. After three sets on one hold, move to the next hold and do three more. Continue until you have completed a circuit of seven holds.

After you’ve been doing dead hangs for a few weeks to build tendon strength, start incorporating pull ups into your routine. Start on two holds, which don’t have to be the same type or on the same level. Do three pull ups, rest for 15 seconds and then do another three. Repeat until you have done three or four laps. However, if you feel any pain in your elbows, stop and return to dead hangs until you have more strength.

Hangboarding can also involve core workouts. To start, try leg lifts. Grab the largest holds and lift your knees toward your stomach ten times. As you become stronger, hang for 30 seconds with your legs bent at the knees. As that becomes too easy, hang with your legs in an L.

With a wide number of holds, system boards in climbing gyms can be very useful for training. If you’re looking to refine your movements, balance and technique, the system board is what you should be working with.

To begin try a sequence that is easy for you--perhaps five moves. Then build the intensity. Use holds that are less easy to grip or, try steeper angles until you start failing. Try to aim for a sequence that offers an 80 percent success rate.

Do the sequence twice on one side and twice on the other. Between tries reflect on how your body felt, making adjustments to position and strength. Contemplate the difference between the sides. Start with your stronger side so you know how to do the sequence correctly, making your weaker side a little easier.

Remember, in order to climb your best, you’ll need to make sure both sides of your body are strong. System boards are wonderful at building symmetry.