How to Stay Safe While Freeriding?

Before you head into the backcountry, read our article on how to stay safe while freeriding. It may just save your life. Find more expert tips at Decathlon. 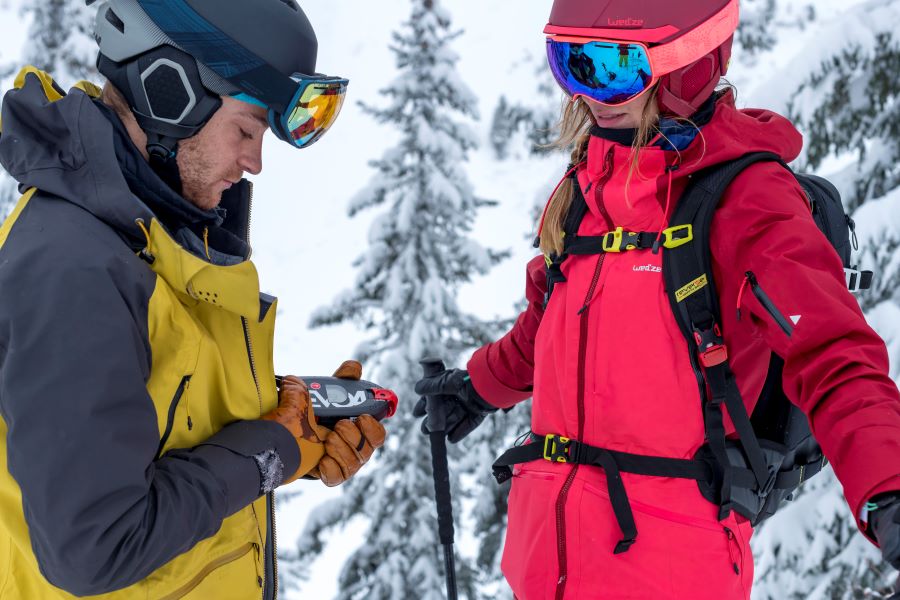 Whether you’re a freeriding novice or seasoned pro, there are a few precautions that every skier should take when exploring the backcountry. Skiing through waist-deep powder in the backcountry can be one of the most rewarding and exhilarating experiences.

With waist-deep powder also comes the risk of avalanches. It’s important to know the telltale signs as well as how to react if the worst should happen. Our handy article explains everything you need to know about staying safe while freeriding.

Before you head off-piste, make sure to check the mountain’s danger ratings. There are five international avalanche danger levels, which are calculated based on weather conditions and likeliness of an avalanche.

Level 1: Low Risk. Snow cover is stable, so avalanches are unlikely in most areas. You still need to be wary of areas with severe overloads and steep slopes. However, you should be good to go.

Level 2: Moderate Risk. Snow cover is relatively stable but may release on steep slopes with severe overloads. While you should be alert, there’s no reason not to hit the backcountry.

Level 3: Marked. Snow cover is moderate to weak on most steep slopes. Low overheads could release an avalanche and some spontaneous releases may also occur. Best to stay out of the backcountry.

Level 4: High. Snow cover is weak on most slopes. Medium to large avalanches are expected. Best to stay out of the backcountry.

Level 5: Extreme. Large avalanches are expected even on gradual slopes. Definitely stay out of the backcountry.

You should also check the weather forecast for your ski area before you head off-piste. Weather can dramatically influence the chance of avalanche as wind, new snowfall and changes in temperature can trigger a release. Always check the weather the evening and morning before venturing into the backcountry.

Before starting your ski day, there are two daily reports you should check: The B.E.R.A and P.I.D.A. These will inform you about the likeliness of an avalanche as well as any plans to trigger a release.

Find a Ski Buddy (or Two)
Once you’ve confirmed that conditions are safe, find a ski buddy. Skiing with a small group of people, ideally between three to five people, can make sure you’re safe when skiing in the backcountry. Having more than one other person with you guarantees that an injured person is never left alone. Skiing in a group is always a good idea regardless of the avalanche risk.
Plan Your Route
Planning your route ahead of time can make sure you ski in safe zones and don’t run into trouble. You can get a good idea of the terrain by reading maps, guidebooks or talking to the locals. You want to avoid crevasses as well as icy zones as these areas are particularly dangerous. You might not see these danger zones till it’s too late, which could result in injuries and rescue missions are particularly tricky when you’re skiing the backcountry.
It’s also important to leave a copy of your plans at home, so someone knows where to look for you if you don’t return at the expected time.
Avalanche Safety
Avalanches can be triggered even in the best conditions. Fortunately, there are some ways that you can reduce the risk when skiing off-piste.
Ski one at a time. If there’s any possibility of avalanches, you should take turns to get down the mountain safely. Avalanches are triggered when the load on the snowpack causes the slab to fracture sending snow tumbling down the mountain. Taking turns reduces the weight on the slab, which reduces the chances of avalanches. When you’re waiting for your turn, make sure to stand somewhere safe, so you won’t be caught up in the avalanche.
Follow the leader. If the skier in front didn’t set off an avalanche than it’s likely that route is clear and you should be fine as well.
Examine the slope. Look for any signs of recent avalanche activity and identify the areas most prone to avalanches. Convexities, where the slope goes from flat to steep, and wind-loaded slopes are two of the greatest danger zones as skiers can easily trigger releases.
Be aware of what is below you. Stay away from cliffs and narrow bowls as these areas can have more drastic consequences in an avalanche.
How to React to an Avalanche

If you spend enough time in the backcountry, it’s likely that you may find yourself in an avalanche. Follow these steps and most of all stay calm.

Having some basic safety and avalanche training under your belt could make all the difference. After all, you need to respond properly to emergencies to keep yourself and skiing buddies safe. Many mountains run training courses to make sure you’re fully prepared and advanced ski instructors or mountaineering courses will be able to introduce you to the backcountry basics.

It’s also a good idea to get some basic first aid training. Most mountain towns have mountain rescue associations or local emergency services that run first aid courses. When you’re skiing the backcountry, you’re sometimes a long way from help and having someone on hand that can respond to injuries can be a lifesaver (literally!).

First aid responders know that the first call of order when responding to an incident is to protect yourself, others and victims by making sure all danger has passed and avoiding another accident. Once the threat has cleared, you need to alert snow patrol and emergency services which is why it’s helpful to ski with more than one other person. You can learn more about how to react to emergencies during a simple first aid training course.

Knowing how to respond to an avalanche or emergency is only half the equation, you also need to have the right equipment and understand how to use it. Below are some of the must-have avalanche safety gear for skiing the backcountry.

Not only is it important to have the right mountain security gear, but you also need to know how to use it. Testing these devices in the field will make it easier to find someone buried in an avalanche and increase your safety when in the backcountry. Mountain rescue associations and climbing clubs run courses on off-piste safety, so you always know how to respond.