Want to make the very most of your little one's sporting spirit this summer? Check out our selection and get started with your very own Olympics for kids. 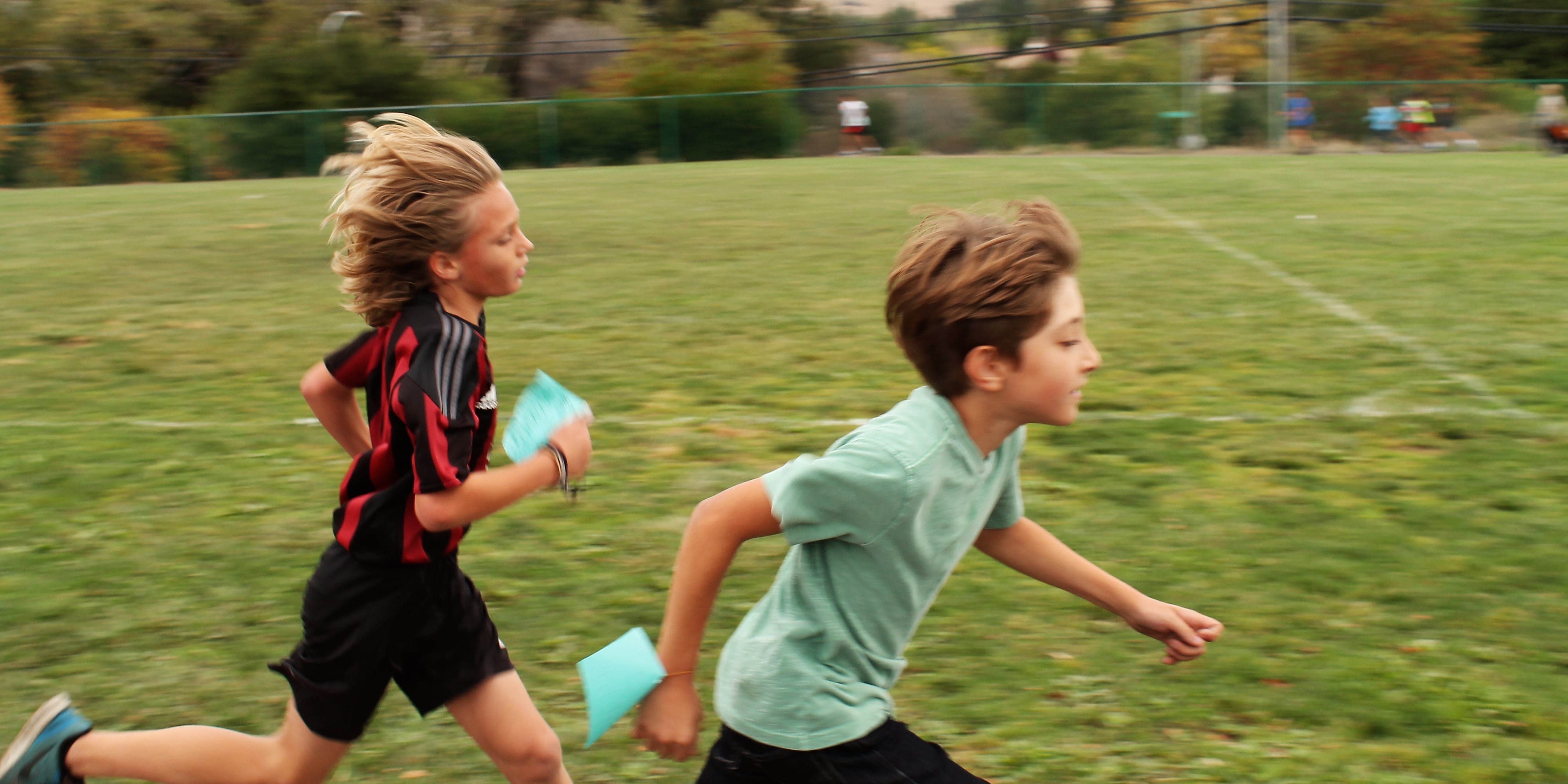 It arrives every four(ish) years, brings glory to those that win, shows the host city at its very best and draws attention to many sports that don’t always get the attention they deserve. However, what’s the most important thing about the Olympics? It's not the records, or the golds...it’s the legacy. After the 2012 Games in London, people talked about how the city would become a hub for sporting excellence, and how it will inspire generations to come. If your kids are feeling this level of excitement and inspiration, then our selection of Olympic activities for kids, (perfect for the park and garden) could be just what you and your little ones are looking for today.

How to play: A combination of a normal relay and a three legged race! It’s probably a good idea to start things off by explaining the concept of each race, just so your kids have at least a mild understanding of how it all works. Although the normal number in a relay team of four, this version allows teams of up to eight with sets of 2 with their feet tied together,(much like three legged). Each set of runners set off holding a baton (or item that resembles a baton) will do their very best to reach the following two, then pass the baton, which allows them to run onto the next set, who will then attempt to get to the finish line.

Equipment you need: Material to tie the participants legs together to turn them into three legged runners (make sure it's not impossible to untie. A baton for each team (it could be anything carriable, including a sponge), markers to clearly show each stage of the race, and last but certainly not least, water for the competitors.

How many people you need to play: An even number, but at least eight to be able to make the race work.

How to play: This is an activity that involves all of the coordination and control of the real event with none of the risk. The main aim is for each participant to get across the length of the straight beam without losing their balance and stumbling off the side. Once they have mastered this, try making the beam a little harder with additional features to the challenge such as zigzags or semi circles.

Equipment you need: This all comes down to where the event is taking place. If it’s outdoors, either in the garden or the park, lay down a plank of wood, piece of rope or make a line with chalk (making sure you aren’t causing any damage to the surface). If it is indoors, use several strips of masking tape to create the beam.

How many people you need to play: Any number will do. Even if you have just one child involved, it will both challenge and help them develop their balance.

How to play: Organise the competitors by standing in a line at one mark. Taking it in turns, each child will be allowed to take two steps before throwing the Discus (which will actually be a frisbee).Make a marking after each throw. You then are able to determine the winner.

Equipment you need: Just a frisbee, and placeholders to mark the distance of every throw. These could be anything from masking tape to small rocks...just so long as you know whose throw is whose.

How many people you need to play: A minimum of two, but it is certainly a case of the merrier!

How to play: There is no real way to play, just a great opportunity for your kids to let loose with hoops, ribbons, balls and of course music. It’ll be most fun if each child takes their turn to perform, and will also minimise them banging into each other.

Equipment you’ll need: A device to play music from, and then hoops, balls and ribbons that empower your little rhythmic gymnasts.

How many people you need to play: Any number from two upwards.

Photo by Ashton Bingham on Unsplash 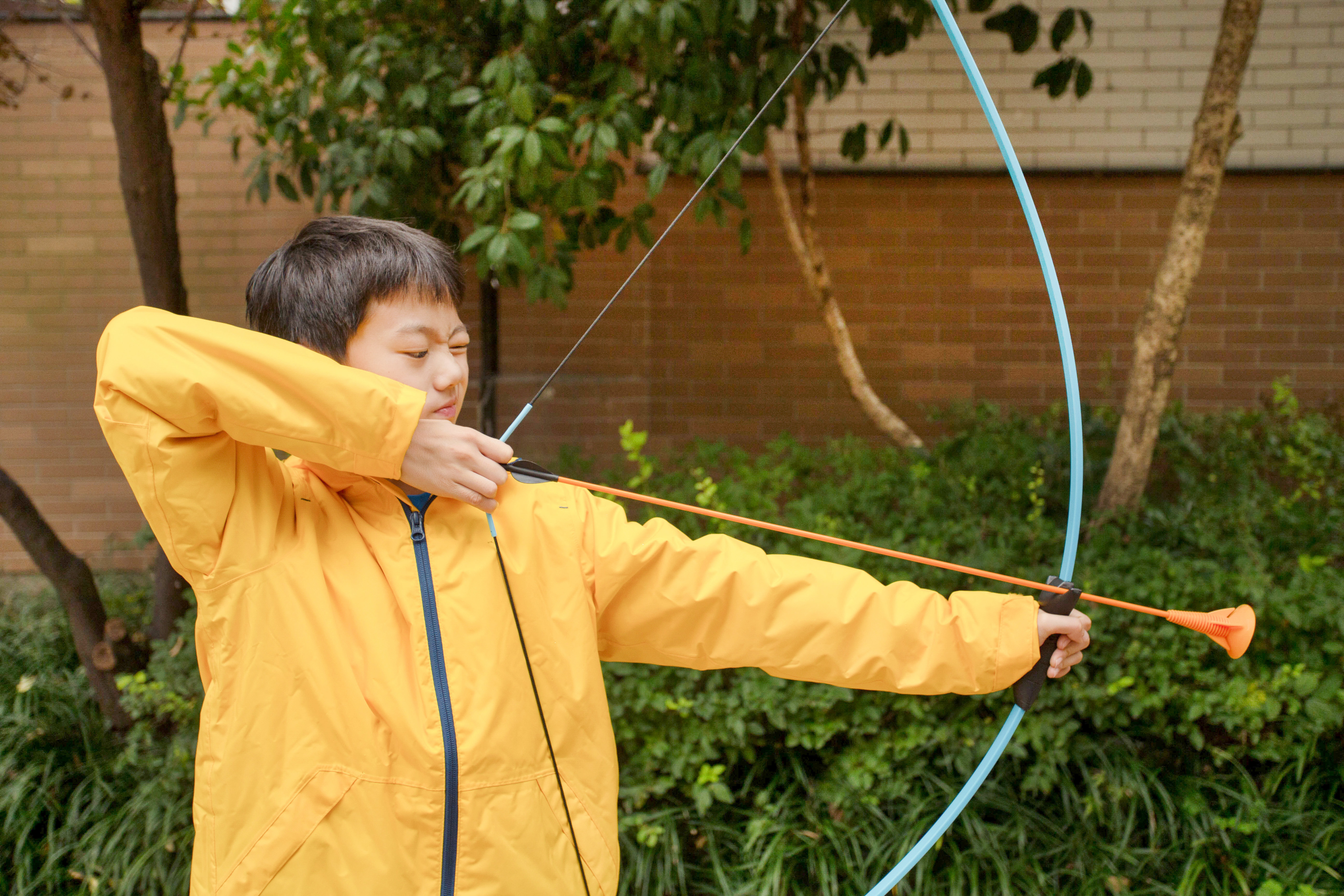 How to play: It’s pretty similar to the style of Archery you will see at the Olympics, just with the target being much closer. Each player takes a turn to fire three arrows at the target and then keep score of their total. However, as kids will be involved with this version, it’s important to follow safety rules. These include never leaving a bow in the hands of an unsupervised child, never taking aim at a person or animal, shooting an arrow at a window. Also, before you allow a shot to be taken, make sure the arrow is in good condition, and that no one is behind the Archer.

Equipment you’ll need: An Archery set. And a pen and paper to keep track of scores.

How many people you need to play: At least two, although it’s worth keeping it to a maximum of six, so you can keep an eye on everyone playing.

How to play: After setting up your net, see how many times your little ones can get the ball back and forth, over the net without it dropping. If you don’t have a net, have two of the kids hold a piece of rope and create one. It’s an inclusive game too, older kids can also get involved. Just lower the net and have the oldest players sitting down or on their knees.

Equipment you need: A Volleyball Net (or a longish piece of rope) and a ball (this can either be a volleyball, an inflatable beach ball, or even a balloon).

How many people you need to play: It’s worth having at least two on each team, but the more people that play, the more fun and intense the game will be. If you don’t have a net and are going down the rope route, players will need to take it in turns to hold it up.

How to play: When putting on an olympic games for kids, this is a must have running race that requires a little bit of imagination. As well as being an unnecessary expense, small children will struggle to make it over actual hurdles, meaning it is up to you and your gang to create their very own in new inventive ways. After that’s done, all you have to do is set the distance for your little ones to run and where they have to jump and give them a 3,2,1 and go!

Equipment you need: Hurdles can be anything from boxes, cones, footstools, or even empty plant pots. You’ll also need something to mark up the running distance.

How many people you need to play: To make it competitive, you will need at least two hurdlers to take part.

Olympic sport it’s similar to: The popular game of basketball

How to play: Imagine basketball with no basket (instead replaced with a laundry basket), and no ball (replaced by a beanbag or a cuddly toy). It’s more fun than it might sound. Using very similar rules to basketball (although they’ll be allowed to move without bouncing), your kids line up in two teams and move about the space you’ve created, passing the ball, winning the ball, and shooting the ball into one of the two laundry baskets. Much like basketball, this will be a non contact sport, which means your little ones can develop their teamwork skills and quick thinking whilst not hurting themselves or each other.

Equipment you need: One ball (beanbag or cuddly toy, or anything else you feel comfortable throwing about the space, and then two laundry baskets, to work as the perfect basket. Also worth having masking tape to arrange the court boundaries.

How many people you need to play: A minimum of 3 on a team and maximum of 6 (providing there's the space of course).

Olympic sport it’s similar to: The beautiful game of football.

How to play: Instead of giving you and your little ones just one football game as part of your Olympics for kids, we’ve decided to give you eight! Find all the information you need in our PLAY article. To add to the sense of competition during the day, you could also add up all the scores from the football games you play, and then make them part of the score.

Feel like there are any Olympic events we’ve missed? Feel free to leave them in the comments below. If not, enjoy your day!