In the mood to discover the top cycle tracks of God’s Own Country? Check out our rundown of Yorkshire’s top riding routes. 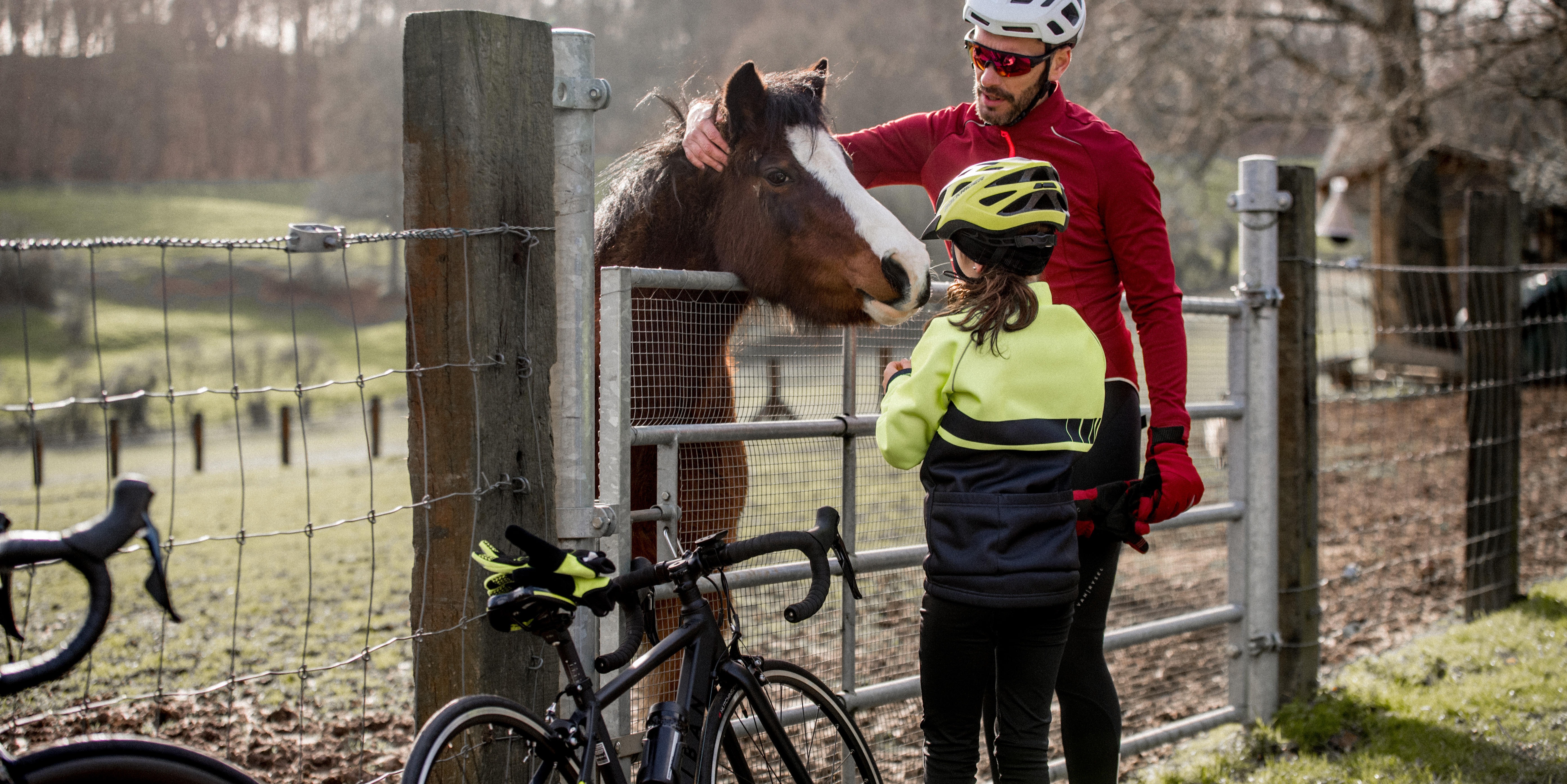 Credit: Father and daughter stopping to pet a pony mid-way through their ride together

With historic towns and two national parks, you’ll never be short of things to see in Yorkshire by bike. Whether you’re from the area and want to discover something new or away on holiday and looking for an active way to take in the region, these Yorkshire cycle routes have something for everyone.

A pleasant 15km family bike ride that takes you through South Yorkshire via paved cycle paths. Starting in Doncaster, cyclists will be able to enjoy a small section of the trans-pennine way at Sprotbrough, as well crossing the River Deane, the nearby Denaby Ings Nature Reserve and the old Don Valley Railway line. There is a second opportunity to ride along the trans-pennine way towards Mexborough but it is important to note that the latter part of the journey (Mexborough to Rotherham) is not open to cyclists, and therefore means riders will have to negotiate their ways along Station Lane and Oughtibridge Lane before finishing up in Rotherham.

Following an old railway route that ran between 1885 to 1965, this track tells the story of the old Yorkshire. Taking cyclists from the famous town of Scarborough all the way to the sea village of Whitby, experienced riders could do both legs of this 33km track in a day.

However, if you're doing it in a family or a group of less confident riders, it’s worth taking your time with it and stopping off the 120ft high Larpool viaduct, the unusual town of Ravenscar or take in the sights of Robin Hood’s Bay.

Ideal for both families and those who want to test out of their mountain biking skills, this rough and ready route takes riders through Swaledale Valley, an area many consider to be the Yorkshire Dales at their most picturesque. This easy to follow 21km trail runs alongside the River Swale and Low Whitta, two areas that are perfect for families, as younger riders can go along the track at their own pace, whilst taking in glorious surrounding woodland scenery.

If you’re looking for a stop-off point, the village of Gunnerside is an excellent place to take a drinks break, before the final part of the ride, which must be said is slightly harder work than the rest.

Built in 1936 to provide water for the Bradford area, this 38km bridleway loop is halfway along the Nidderdale and has been described as a ‘Dale classic’ by mountain biking experts.

A circular route that starts off at Pateley Bridge, climbing up towards Ramsgill and Middlesmoor, before dropping down in Scar House Reservoir. Riders will then cross the two Dams, making the very most the overground fields and uneven track and stunning scenery.

A circular mountain biking route that heads right into Malham, this is a 36km ride with a 958 metre climb, and not for the faint hearted. Starting in the town of Settle, riders will be immediately faced with a tough climb from the off, heading up towards Gorbeck road and then towards the glacial lake of Malham Tarn and the waterfalls of Gordale Scar and Janet Foss. As you pass the remote village of Bordley, you will then start to head back towards Settle through a tough grassy surface and rocky Stockdale Lane.

The village of Bolton Abbey is not only a place of historical and theological importance (it was closed down as part Henry VII’s Dissolution of the Monasteries), but it is also the start of an excellent 39.4km mountain biking circular route. Travelling up to the famous Barden Moor, home to the Rylstone cross and of the stunning Cracoe Fell, mountain bikers will be able to experience the Yorkshire Dales at their most picturesque, before returning to Bolton Abbey.

A pleasant 41.5km route, taking cyclists round the west of the Yorkshire dales, with stunning views across the Lune valley. Starting off at St Andrews Church in the famous ‘book town’ of Sedbergh and ending in the market town of Kirkby Lonsdale, riders will be able to enjoy for the most part flat cycle route, although it will start to steepen as you approach the glorious Barbondale area, which is situated on the Western edge of the dales. During this part of the cycle it may well be worth checking out the East Gill Cave system, as well as the 19th century French/italian influenced Barbon Manor.

At 204.7km long and with an amazing 91 locks between these two historic UK cities, this is the longest UK canal built as a single waterway. With a number of small beautiful villages such as the historic salt town of Saltaire and spectacular pennine views along the way, cyclists have a wide array of drink break options. Another highlight, not long after cycling out of Leeds, is the Bingley High Rise Locks, which is certainly worth checking out in action.

This easy, flat cycle is the perfect way to get around the famous city of York in just under three hours. The route is 13.2km in its entirety, all of it sealed tarmac, and with 60% of it car-free, and 40% quiet roads. Although it is built to be more functional than as a way of sightseeing, there is still plenty to take in during the ride, including the Millenium Bridge, the Tyburn monument and the green areas of Knavesmire and Foxwood. A pleasing ride if you are close by or in the area.

For most of the past decade, Yorkshire has planned an integral role in the world famous Tour De France. The 101st edition saw Yorkshire become the starting point for the Grand Tour, heading down south, across to Belgium before winding through the Alps and Pyrenees, finishing at it’s famous Parisien checkpoint at the Champs Elysees.

This decision to kick off each year's race with a different Yorkshire route has led to Yorkshire becoming one of the premier cycling hot spots in the UK. Although cancelled along with the rest of the Tour de France due to the global Covid-19 pandemic, it is still possible for visiting cyclists to ride those very same routes (claimed to be the toughest yet) that the elite riders of the tour would have done.

First up is the men’s stage one race, which is a massive 176.5km, and runs from Beverly to Redcar. The second stage on the mens and first on the women’s, takes cyclists from Skipton to Leyburn which comes in at 124.5km. The woman’s stage two is the 114.5km ride from Barnsley to Huddersfield, which would’ve also been the men’s stage three of the tour, albeit a slightly longer distance at 134km. The Tour De Yorkshire Route finishes with the stage four of the men’s, which is another gruelling cycling at 177.5km from Halifax to Leeds.

While it must be said that each of these are tough cycles, it would be quite a thing to be able to say you’ve achieved something that 2020's Tour riders have not!