Looking to experience God's own country at it’s finest? Here’s the rundown of the best walking Yorkshire has to offer. 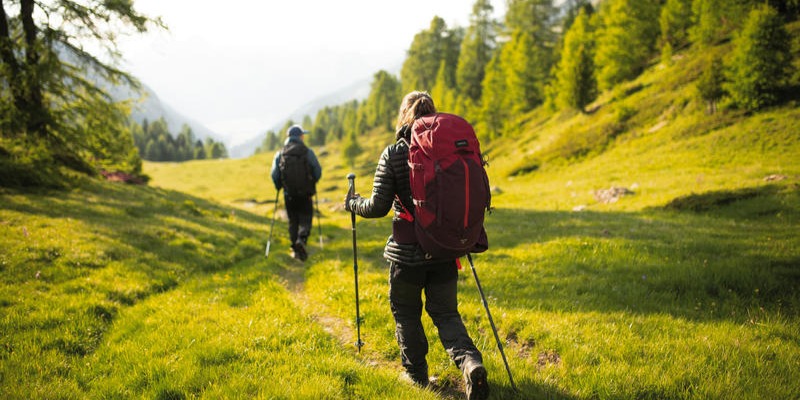 Credit: Couple taking a walk in the countryside together

Surrounded by many other natural reserves, it’s fair to say that the Yorkshire Dales National Park certainly has a lot of competition when it comes to walking routes. Despite this, it’s one of the UK’s top walking hotspots and is commonly believed to have some of the best treks in the country - so it definitely makes it onto our best Yorkshire walks.

As it was previously the heart of Britain's mining industry, not only will you experience numerous sites of outstanding natural beauty during your dale treks, but also a sense of our country's industrial past and how (rightly or wrongly) it has influenced how we lived today. It’s an area filled with valleys, waterfalls, caves and river systems, meaning there is always more to see during a trip to the Dales.

A route that is based on a holiday taken by the world famous vet James Herriot (real name Alf Wright) and also written about his books ‘All Things Brights and Beautiful’ and ‘James Herriot’s Yorkshire’.

This 83.6km circular walk takes visitors around some of the best sites the Yorkshire Dales has to offer, including views from The Great Shunner Fell, the Welneysdale and Swaledale valleys, and the waterfalls of Aysgarth and Hardraw Force.

Given its length, The Herriot Way is usually done over four days, although this can of course vary depending on the walker. The first day takes trekkers along the River Ure, down to the village of Askigg, the very place that Herriot filmed his BBC television series ‘All Creatures Great and Small’. Day Two is largely along the paved walk of the Pennine Way, and involves the spectacular sights from Shunner Fell. The third day requires walkers to ask themselves the question: low or high?

For those less experienced, taking the easier route through Kidson Gorge and past the iconic River Swal is probably more preferable. For hikers who want something more challenging, take the high road to the outstanding natural scenery of Gunnerside Moore, before aligning with the previous route at the River Swale. The final day takes walkers to expansive fields and heathland of Gibbon Hill, and ending where the walk began in Aysgarth. Each day ends in picturesque Yorkshire villages with excellent B&B opportunities, making it an excellent short holiday and one of the best walks in the Yorkshire Dales.

At 1,237ft above sea level, a catchment area of 6km2 and with the area of Malham itself a site of scientific interest, this glacial lake is one of the best Yorkshire Dales’ walking hotspots. It's an area that has something for everyone, whether it’s the Upland farm walk, where walkers can enjoy rich and diverse fauna and coming into close contact with Malham farm life, or discovering it’s Mesolithic past on the Archaeology Walk.

Last but certainly not least, the route that takes you round Malham Cove, the gorge of Gordale Scar and Janet Foss waterfall, which is a must if you are in the area.

Standing at 2,372ft and one of the York Three Peaks, this is one circular walk in Yorkshire dales that cannot be missed. Setting from the village of Clapham and journeying through Clapdale woods, walkers will soon arrive at the Ingleborough Caves, and the starting point of Gaping Gill, which at 21km long, with 4km long Fell Beck running above ground then plunging into what is also the largest cave in the UK, with has an expanse big enough to fit an entire cathedral.

Unless you are part of a caving society, experiencing Gaping Gill to its full worth can be tricky. Although there are times during the year when exploring the caves are open to the public (the late May bank holiday and a week in August), you can alternatively continue walking up Ingleborough to experience the spectacular views of Trow Gill.

As you head down towards the southern part of the mountain, there is also the opportunity to enjoy the Norber Erratics, a glacial set of boulders that are believed to be over 12,000 years old.

A short (1.5km) but beautiful trail, this North Yorkshire walk is one of the best Yorkshire walks in the Dales with children, giving visitors both waterside walks and aerial views.

Opened in 1910, the reservoir supplies water to the north and west of Skipton, and features a 79ft Dam. The gritstone Embsay Crag has a number of breathtaking views of the Airedale and Skipton area, both on the easy walk and upon reaching the summit. Once at the top of the Crag, there are easterly views out toward Old Pike, Halton Height and Simon’s Seat.

Both challenging and atmospheric, one of the circular walks in the Yorkshire Dales that needs to be experienced to be believed. A 11.2km elevated walk, taking visitors above the town of Ilkley and attractive moorland and beautiful countryside.

The two main highlights of the walk come in the shape of rock formations. First of all there is Cow and Calf, two rocks which take the little n large shapes of the aforementioned animals, seemingly sitting side by side. Next up is the grandly titled 12 Apostles, a Bronze Age stone circle formation made of millstone grit. Both sound strange when described, but are certainly worth a visit if you are in the area!

Also, if in need of a drink break, this walk also involves a stop off at the Cow and Calf pub.

Situated across the boroughs of Craven and Harrogate and the cities of Leeds and Bradford, the upper valley of River Wharfe is one of the stunning dales of the area.

The Horse head Moor and Deepdale is a 8km walk that both takes you away from it all, and allows you to reconnect with nature. This challenging route, zig zagging along the remote moorland ridge taking walkers within view of the Pen-y-ghent, Whernside and Ingleborough, known as the Three Peaks of Yorkshire. The second half of the walk declines, heading down towards the Greenfield Forests and the River Wharf, end at another Bronze Age stone circle at Deepdale.

Although a strenuous, and at a fairly lengthy distance, the dog friendly 11.2km walk of Buckden Pike shows the Yorkshire Dales in all its glory, as well as being the setting of a World War 2 disaster. In 1942, six polish airmen set off from a base in Warwickshire, only to lose their bearings in a snowstorm. They crash landed in Buckden Pike, with only one of the crew surviving. Years later, that one survivor would return to the site to build a memorial, which is now an important part of this walk. Along with this journey back in time, the trek also has a number of stunning views, including the 702m summit view and the River Wharfe.

To see a more secret side of the area, why not explore the Hidden Valleys of Wharfedale? Seen by many as one of the best walks in the Dales, this route allows visitors to explore both the easy Langstrothdale, which, taking visitors past the Yockenthwaite stone circle, and allows the opportunity to go swimming in the limestone rock pools, and more arduous, longer but as beautiful Littondale walk.

If you’re in the mood for a waterfall and a dog walk, this is just the ticket. The Hardraw Force waterfall was made famous by the 1991 film “Robin Hood: Prince of Thieves” (and that Bryan Adams video) Hardraw Force is Robin’s chosen method to shower, as seen by Maid Marian. Located in the grounds of the Yorkshire Dales’ historic Green Dragon Inn and forged in the limestone gorge of Hardraw Scar, with a length of 30m this is the largest single drop waterfall in England.

To get the very best waterfall walk the area has to offer, take the circular route from the village of Hawes.

Venturing out of the Yorkshire Dales now, Howgill Fells is one of our best Yorkshire walks. With so much to see, it’s almost possible to have a mini holiday in this one area. Situated between the Yorkshire Dales and the Lake District, Howgill Fells is seen as something of a no man's land, both an area of outstanding beauty, as well as a place of solitude. The highlights of the area include a 16.4km climb of The Calf, which at 2218ft tall is Howgill Fells highest point and allows excellent and (often uninterrupted) views of the area. This walk also gives you the option to visit the Cautley Spout, which standing at 600ft is England’s highest waterfall.

There is the option of a 11.8km walk through Potts Valley, which is ideal if you are looking to both stretch your legs and ease your mind. If you’re looking for even more walking options in Howgill Fells, check out #GetOutside champions James Forrest’s 5 epic walks.

Much like it’s fellow Yorkshire counterpart, the North Moors are a selection of valleys made up by a number of dales. While containing the biggest heather moorland area in the UK, the North York Moors is also dotted with towns including Whitby, Pickering and Robin Hood’s Bay. There are a number of excellent Yorkshire Moors walks, that offer both woodland and coastal views.

A 175km route that is as beautiful as it is expansive, taking you through fields of wildflower and strolling with breathtaking views of Saltburn-on-Sea. Starting off at the picturesque town of Helmsley, and ending in the village of Filey, there’s so much to discover along the way including Roseberry Topping, Whitby Avenue, the Cleveland Hills and a selection of old fishing villages.

There are a number of different ways to do this route and much like the aforementioned Herriot Way, this walk alone is enough for a short holiday. To experience the journey in its full blossoming glory, it’s best to come during the months of August and September.

It’s the 70ft waterfall that has been drawing visitors to the village of Goathland since the Victoria times, and shows no sign of being any less of a draw in the 21st century. Starting off in Goathland, this circular route takes walkers up to the waterfall through a country lane, before heading to the small valley village of Beck Hole and along the River Musk. If this waterfall walk hasn’t quite done it for you, there is also Falling Foss waterfall close by. It's one of the best walks in Yorkshire if you're a fan of waterfalls!

A journey that takes you across the North Moors in its entirety, this walk gives visitors a sense of the natural diversity of the area. Even more so than the Cleveland way, there are various ways to undertake this Yorkshire Moors walk. While it begins just north of the village of Osmortherly and finishes by the sea at Ravenscar, as long as walkers stay heading the correct direction, it's very difficult to get lost.

However, it is wise on a walk to have certain landmarks to look out for, so we would suggest strolling along the dismantled railway, checking out the Blue Man-i-th-Moss standing stone, and journeying through Fylingdales Moor (although this is MOD site so do check that it’s safe to cross before doing so). The final part of the route, Lilla Cross, which is managed by the Hawk and Owl trust, gives you the opportunity to spot some birds of prey in action. It's one of the best Yorkshire walks if you're looking for lots of diversity.