Heading down to the south coast? Check out our selection of top trails from around Wiltshire, Hampshire and Dorset. You won't be disappointed. 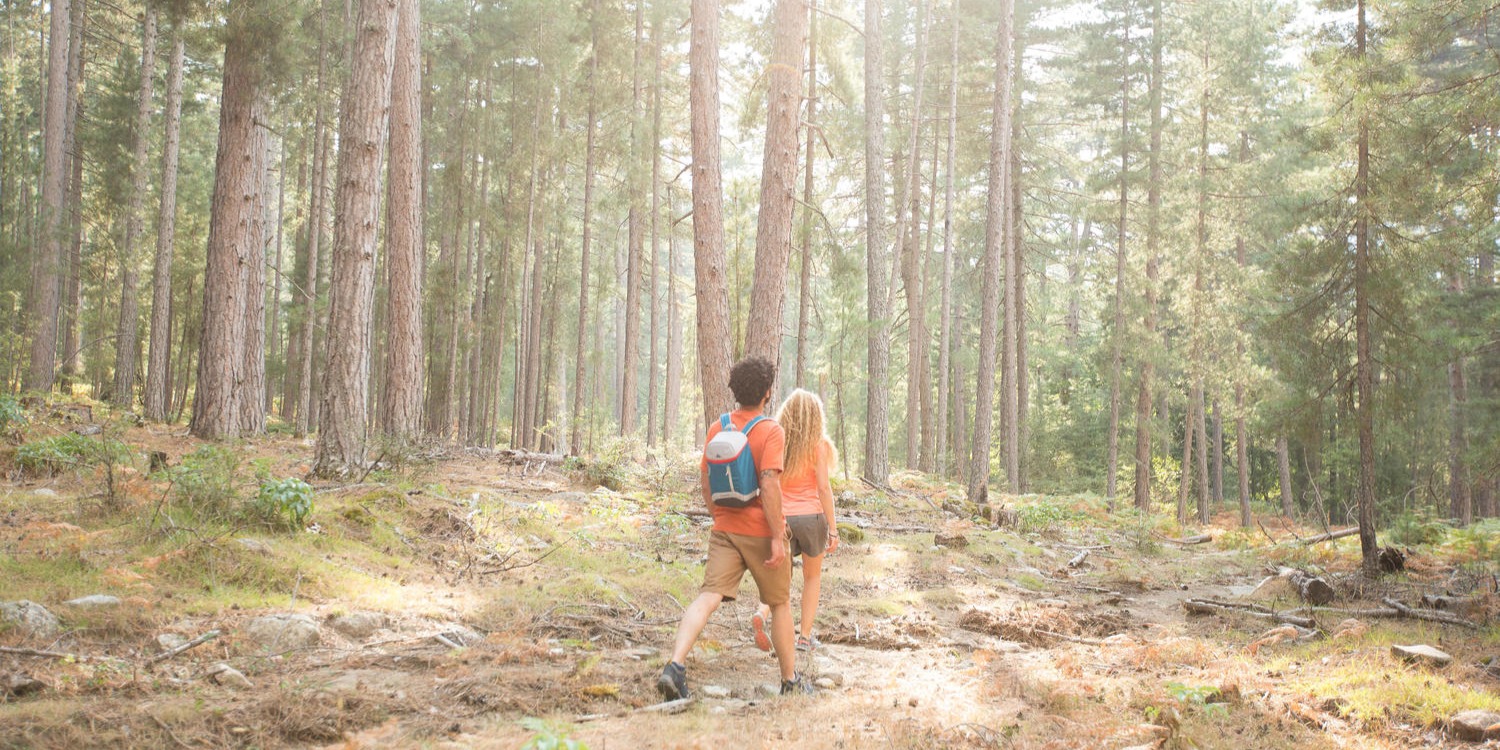 Credit: A couple of walkers on a forest trail path

There are a number of historical locations across the New Forest area, including Lyndhurst, Lymington and Brockenhurst, meaning visitors can enjoy town as well as country life during their stay. With 140 miles of tracks and footpaths, several nature reserves and a combination of woodland and coastal views, walking in this area has something for everyone. Discover the quintessential New Forest experience with our range of diverse, spectacular and historic walks.

Known for its large village and civil parish, this area is seen as the ‘capital of the New Forest’, and a popular tourist destination. Home to a number of historic monuments, including both St Michaels and All Angels Church, the Queen’s house, and the grave of Alice Liddel, there are a number of landmarks to visit whilst in Lyndhurst. To take all these alongside the glorious countryside, there are a number of trails on offer.

The Lyndhurst Circular takes walkers on a 3 and half hour tour of the surrounding countryside, starting and finishing at Bolton’s Bench, the legendary location where the Bisterne Dragon was slain (Legend has it that the dragon’s victor would also go on to be buried at Bolton’s Bench, with his grave turning into a yew tree that can be seen today).

Other highlights on this trail include views over White Moor, Race Course View, and herds of wild horses and deer. A slightly shorter Lyndhurst route at 7.1km, is the Copythorne and Cadam Common walk, which takes visitors along past both St Mary’s Church and Copythorne Common, with scenic countryside and grazing animals throughout the journey.

Not far from Lyndhurst, there is also the 11.6km circular walk from Brook to Minstead Village, which takes visitors past The Rufus Stone, the mysterious burial spot of King William II and one the New Forest’s oldest landmarks. Walkers then have the option to follow a royal burial spot by visiting a grave of literature royalty, with Sherlock Holmes creator Sir Arthur Conan Doyle, buried at the All Saints Church in Minstead Village.

For foodies who love a stroll, the 19km North Taste Trail is seen as an essential New Forest pub walk. Starting off with an excellent breakfast at The Hyde Out Cafe not far from Fordingham, this route will take you up to Frogham, to enjoy glorious views across Hampton Ridge. Next up is Fritham, historical birthplace of the 16th century Doomsday book, and home to farm pigs snouting for acorns and chestnuts. For those looking to tuck into some lunch, both the Royal Oak pub and Fighting Cocks are excellent eating establishments. The final part of this trail is the seven arches of the medieval stone bridge in Fordingham, before heading back to Lyndhurst.

Facing both Yarmouth and the Isle of Wight, Lymington is a port town with a large tourist draw, both for it’s yachting culture and some of the best New Forest area walks. Of these walks, the longest route would be the 16.5km Lymington section of the Solent Way that runs to Beaulieu. Highlights of this walk include Hurst Castle, an artillery port that dates back to the Tudor period, Sowley Pond, a Site of Scientific Investigation site . This route also leads onto Keyhaven Marsh, which is a walk in itself. With views across the Solent, all the way over to the Isle of Wight, walkers will be able to embrace the rich and diverse habitat of salt marshes and mudflats, this is a bird watcher's paradise.

The Lymington Keyhaven Nature reserve has an ever changing range of birds depending on the season. There are a number of permanent residents, such as Kingfisher and Little Egret, as well as barn owls and raptors, that spend much of the year in the area, along with other wildlife. During the wintertime, it is also home to migratory birdlife such as Brent Geese, Dunlin, Black tailed Godwit and various wildfowl.

Taking all this into account, it is important to note during this walk, that many of these birds will be rearing young and in order to let them do it, it is best that stay on the marked track, and make sure dogs are kept on leads.

Another popular long walk is the 18km Brockenhurst to Lyimnton route. Despite it being normally seen as one of the Brockenhurst walks, if you are staying in the area of Lymington, there is the option to do it in reverse. Just over four hours long, this walk will take you through the landscaped grounds of the now demolished Brockenhurst House, the vast heath of Shirley Homs, and the Roydon Woods Nature Reserve, which if you’re in the mood for more wildlife watching, is home to badgers, voles, stoates, nuthatches and many more.

This fairly easy route along Bratley stream will give you a sense of Bolderwood’s ancient history, with some it’s chestnut, oak and beech trees over 200 years old. Although only 3.2km long, there are a number of benches to stop and have picnics, as well as a viewing platform at the end of the trail where you are often able to watch a herd of deer go about their daily business.

It is important to note that this forest has over 2,000 different types of mushrooms, many of which are believed to have international importance, so it’s therefore vital they are left alone.

From grazing cattle and ponies at the open forest lawns, through the glorious Woodland of Ashurst Wood, to the remains of Denny Lodge, a 16th century saltpeter house, this 4.5km circular stroll allows walkers to experience everything that the New Forest has to offer. Starting at Ashurst station, and ending back walking through the village, it's an ideal walk for those who want to take in the countryside air without getting too much of a workout.

Trailing through a village at the very heart of the area and up Castle Hill, this is a New Forest pub walk with views of the Avon Valley. Although 6.8km long, it is on the whole one of the easier walks in Hampshire, with only a mildly steep climb up Castle Lane. The village and the wider area is one that's steeped in folklore, home to tales of witchcraft, smugglers and even dragons.

On the home straight of the walk, there is the option to stop off at the Queen’s Head, a 16th century pub that was a famous drinking hole for smugglers and highwaymen. While there will be a number of opportunities to stop for picnics throughout the walk, there will also be animals, namely ponies, looking to graze. For the health and well-being of the animals, it’s best not to feed them, as it may harm them (plus they have plenty of food of their own).

Although a short walk at 2.3km, it gives a visitor's sense of the spectacular nature of the Blackwater Arboretum, a selection of trees from around the world, and the biggest in the New Forest, including the giant that is Wellingtonia. This circular route is one that is as educational as it is explorative, with information boards placed that talk about the historical area, as well as the different types of redwoods and firs. It is important to note that there are a large number of roe deer around the area, so it’s vital that walkers look out for them, and of course leave no litter behind.

At 55km, this is one of the longest New Forest walking routes on offer. Named after the river it follows round, this cross-county trail runs from Wiltshire, through Hampshire and ending along the Dorset coastline at Christchurch Priory and Harbour. Although this can be done in three days, the path has been simplified into 5 sections, of which each can be done in a day, and every day having its own highlights, The walk begins at Salisbury Cathedral, seen to be one of the UK’s most beautiful holy places, and takes walkers through some of the New Forest’s most glorious scenery such as Woodgreen and Blashford lakes and cross through well known towns such as Fordingham. As the final part of walk stretches towards the coastline, sights to look out for include 13th century church of St Michaels and the All Saints, as well the Bronze age barrows of St Catherine’s Hill, and the sights of the sea in distance, symbolising that this epic journey is coming to an end. While the Avon Valley Path is a long walk, it’s certainly worth it, if you’ve got the time.