Our super sick ski terminology dictionary has all the ski terms you need to know to hang out with the ski bums and park rats. Read it today at Decathlon. 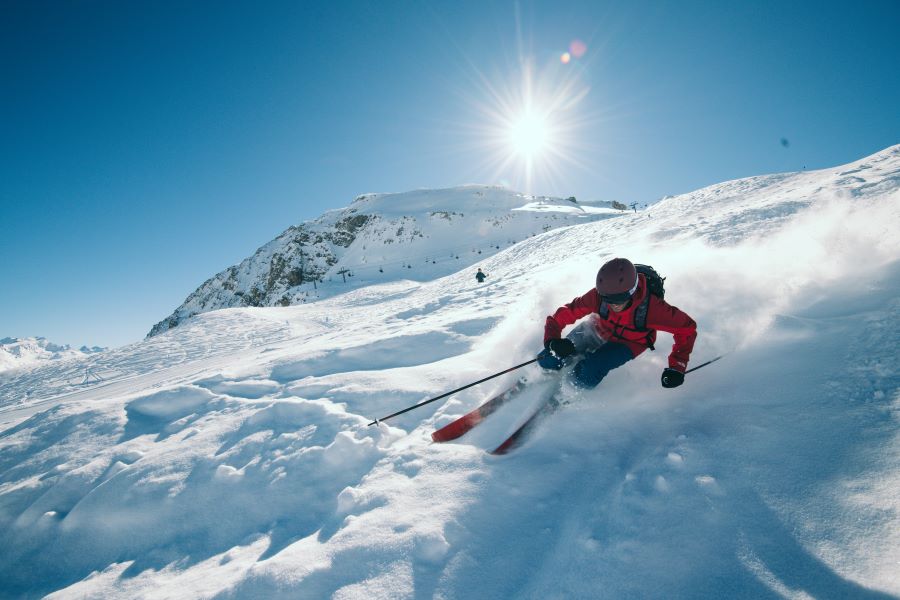 Skiing like a pro is only half the battle, you’ve got to sound like one too. Don’t worry, we’ve got you covered with our ski terminology dictionary filled with all the skiing terms you need to know to hang out with the ski bums and park rats.

All-Mountain Skis. All-mountain skis are perfect for shredding all types of snow and terrain.

Apres-ski ('ap-ray ski'). How most skiers end the day -- with drinks, live music and dancing on tables at the mountain bar.

Backcountry. Also known as off-piste, the backcountry is unregulated, ungroomed stretches of wilderness. It’s here that you’ll find the most epic fresh snow and make lifelong memories. For experts only, trained in avalanche safety and properly equipped to venture off-piste.

Balaclava. A facemask that’s worn to cover exposed skin. Very important when skiing in a whiteout.

Base. The underside of a ski or snowboard. Sometimes also used as a reference to the ski lodge or overall depth of snow.

Bomber. Also known as a joey, a novice skier who rather than make nice turns heads straight down the mountain in an out of control fashion.

Bunny. A fashionista who’s more concerned with whether their outfit matches than actually doing any skiing. Often skis in a snowplough.

Carving. Clean turns made using the edges of your skis. The turn size can vary from tight turn to giant swooping turns.

Chatter. The sound your skis make when travelling over freshly groomed trails at high speeds. Too much chatter can reduce the contact between the ski and snow causing you to lose control.

Crust. A frozen layer on top of softer snow or buried underneath a dusting of fresh snow.

Death Cookies: A skiing term for cookie-sized chunks of ice formed by grooming and snowmaking. If you hit these, you’ll take a super tumble!

Edge. The sharpened metal strip on the side of skis, which is used to carve into the slope and make clean turns.

Freerider. A skier that spends most of their time skiing the waist deep powder of the backcountry.

Freestyle. A type of skiing that involves doing lots of tricks and going off jumps.

French Fries. An American ski slang term for parallel skis, the opposite of pizza (snowplough).

Fun Box. A box found in terrain parks designed for skis to slide across.

Gaper gap. Also known as a joey gap, a gaper gap is the giant, unmistakable gap of forehead visible between a beginner’s helmet and goggles. Not only will you look foolish, but you might end up with a frostbitten forehead.

Gnarly (narly). Something that’s very dangerous and cool. You can also say ‘gnar’ for short.

Kicker. A purpose built jump for going up high and far out.

Liftie. Ski slang for someone that operates the ski lift.

Moguls. Small bumps on the piste caused by many people turning in the same place. Often found on some of the hardest trails as they take skill to navigate.

Rail. A metal bar found in the terrain park used to slide down by skiers and snowboarders.

Scissoring. When your ski tips get crossed, often resulting in a tumble.

Ski Bum. Someone who dedicated their lives to the sport.

Snowplough. Also known as a pizza, snowplough is the triangular shape beginners make with their skis to turn.

Stomp. To land a trick.

Tracked Out. Ski slang term for when too many people have skied the trail and there’s no fresh powder left.

Twin Tips. When a skis’ tip and tail are turned up, so you can ski backwards as well as forwards. Commonly found on freestyle skis.

Waist Deep. A ski word for very deep powder (doesn’t actually have to be waist deep).

Whiteout. A snowstorm that makes it hard to see the trail.

Wipe Out. Big fall which generally results in a face full of snow.