In the latest in our spotlight on series, we look and touch/tag rugby, versions of rugby that can be enjoyed by both children and adults. 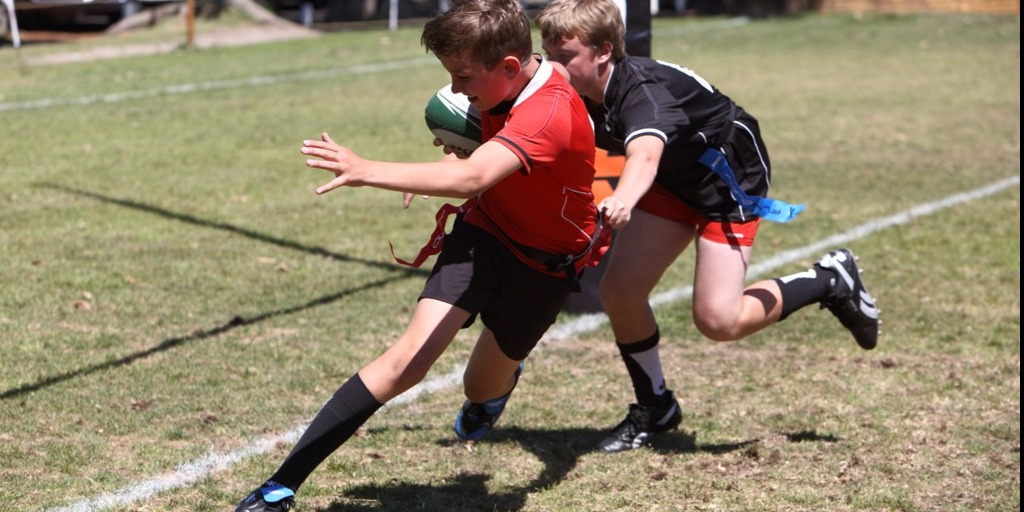 Touch and tag rugby are non-contact versions of rugby, similar games in many ways but with the major difference between the two being how a tackle is made. In touch rugby, tackles are made by tapping both sides of the opponents hips simultaneously whilst they are in possession of the ball. In tag rugby, each player has a 'tag' (a strip of fabric attached via velcro to a belt worn around the hips) on each side of their hips, and when one of these is removed when in possession of the ball a tackle has been made. There are various rules regarding what happens after a tackle has been made - in some variants the player must immediately pass the ball, whilst in others the player must 'play the ball' in a fashion similar to Rugby League. Games can also be capped or unlimited in terms of the number of tackles a team is allowed in possession of the ball, which is similar to the differences between Rugby League and Rugby Union.

There are no scrums or line-outs in touch/tag rugby. Instead, play restarts with possession behind handed over and the team restarting with a pass or a 'tap' depending on the rules chosen. However, the rules in possession will be familiar for people who have played or watched either of the rugby codes - knock ons and forward passes result in a turn over of possession to the other team. However, with no kicks at goal allowed - the team that scores the most tries will win.

By making the sport non-contact, the game is far more about speed and skill than power. This makes the game ideal for children learning the sport, as it allows different age groups and mixed gender groups to play together without risk of injury. The main advantage though is that by eliminating the option to run straight through an opponent using brute force, attacks must be more subtle in order to break through the defensive line. This means that children can focus on learning fundamentals such as passing, attacking the defensive line at pace and learning how to hit good angles. And whilst defensively the child cannot practice their tackling technique, they can at least learn the fundamentals of working as a cohesive unit, something which will stand them in good stead, should they choose to progress onto full contact rugby. Indeed, the Rugby Football Union (RFU) has made tag rugby their official version of the sport for age groups up to under 8s.

So is touch/tag rugby just for children?

Absolutely not. As mentioned, the games are a great way to work on some of the fundamentals of the game, and so are often used by senior teams either as a warm up or during training sessions, and the fact that injuries are less common also can be attractive. The game also is perhaps a more socially inclusive sport - adults can play games in mixed groups with a full range of abilities and everyone can enjoy playing. The fact that the sport is less physically demanding also means that you can play it at more of a recreational level, unlike full contact rugby which ideally should be played in an organised environment.

Where can I play?

One of the great things about touch/tag rugby is that because you do not kick at goal, all you need is enough players to make two teams, a ball, tag belts (if playing tag rugby) and a suitably sized playing area,(preferably with the extremities clearly marked in some way). Also, because the game is non-contact, you can play it on pretty much any surface -whether it's at the beach, in a park or anywhere that is convenient for you and your friends to meet.

Tag/Touch rugby is an example of a game that serves two functions. Firstly, it provides a great introduction to the sport of rugby, allowing people to practice many of the fundamentals of the sport without the pressure of full contact. Yet the sport also works in its own right, thanks to a level of accessibility and ability to play at a recreational level that full contact rugby cannot match.