The Best of Britain: Lakes & Lochs to Visit in the UK

Whether you're looking for a scenic walk along the water or an aquatic adventure, why not check out our rundown of Britain's best lakes, lochs and loughs. 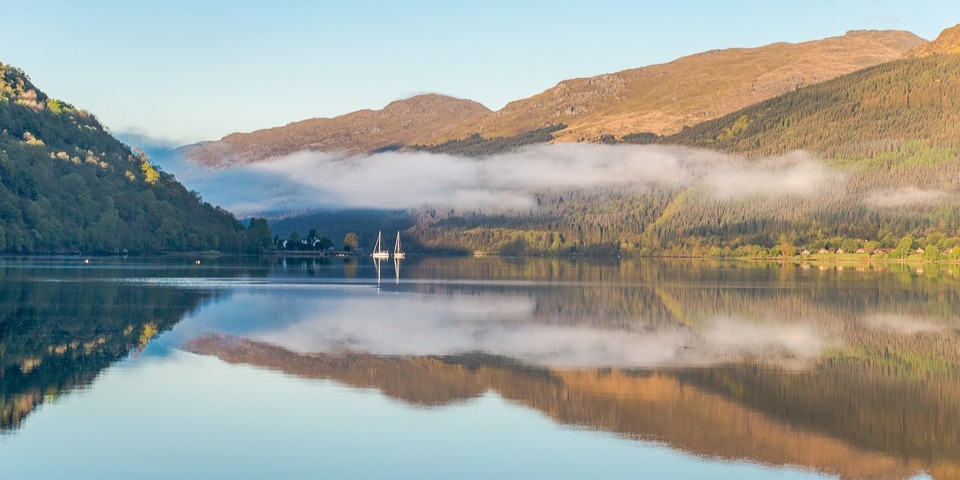 Credit: The best lakes and lochs to visit in the UK.

The Best Lakes and Rivers in England

The name gives it away. Not only does it have some of the most beautiful lakes and rivers in England, it’s also the country’s biggest national park. The area, a World Heritage site, is a massive 2,362km2, and within that space, has 16 lakes and reservoirs and over 41.8km of rivers and coastlines leading into it.

Probably the most popular and best lake destinations is Lake Windermere, located in the southern part of the park. It’s 18.08 km long, making it the largest lake in England, and is 220 feet deep. It’s easy to spend a few days just at Windermere itself, with a wide range of watersport activities to get involved in, steamers and launches taking visitors to the surrounding villages, and of course a selection of walks.

The second largest lake in the area is Ullswater, and is connected to Aira Force, a famous waterfall within the Lake District region. It is seen by many as the most beautiful lake in England, with it’s Ullswater Way walks enjoyed by many visitors each year. Last but certainly not least, is Coniston Water, home to Peel Island, Kirkby Moor, several attempts to break the world water speed record, along with The Old Man of Coniston, the largest Fell in Lancashire.

Coniston is separated from Lake Windermere by Griezedale forest and certainly worth a visit when in that part of the Lake District. The best way to explore the lake itself is via the Circular Walk.

One of the only 8 alkaline (lime) lakes in the whole of Europe, and at 377 metres high, it is also one of the highest lakes in the UK.

Malham Tarn sits just off the village of the same name, and right in the middle of the Yorkshire Dales, the area is rich with moorland uplands, a wide array of wildlife including rare birds and fish, not to mention some of the most beautiful views in the region.

To get the very best of the lake and the surrounding area in good time, the 7.2 km Malham Tarn upland farm circular walk takes you past highlights including the Great Scar, Tarn house and the Tarn Moss Nature reserve.

Located on the southern edge and one of the main attractions of the Great Windsor Park, this man-made lake has been in existence for over 400 years, having been first built by William, Duke of Cumberland in the 1700s. It shares the name with a village to the east of the lake itself, and has appeared in a number of different films, including the Harry Potter series, Into the Woods and Angel has Fallen starring Gerald Butler. The route round the lake is an easy going 7.2km walk, half paved and half a natural pathway, with a number of highlights, including a Totempole, the cascading waterfall, and both a meadow and obelisk pond.

If you’re looking for lakes near London, a leisurely day spent at Virginia Water might just be the one for you.

A reservoir that sits on the border of Kent and East Sussex in the valley of the River Bewl and a 30 minute drive from Royal Tunbridge Wells, Bewl Water has something for everyone. Created over 40 years ago to help control the water running into the surrounding towns (the reservoir holds 31,0000 megalitres), it has since then been transformed to also provide fun activities for lovers of land and water alike.

Not only does Bewl Water it’s windsurfing, sailing, rowing and kayaking facilities, it’s got it’s own Aqua Park, fully equipped with an inflatable assault course. For those who enjoy experiencing things by foot, the journey round Bewl Water is just over 20km, with a number of places to hop on the water taxi from if you’re short on time. Once you're done with the fun, the Boat House Bistro is the ideal way to bring your Bewl Water day to a close.

The Best Lochs in Scotland

With a surface area of 71km2 and 36.4km in length, Loch Lomond is the largest freshwater lake in the UK, and is seen as the boundary between the Lowlands of Central Scotland and the Highlands.

In 2002, the Loch was united with the neighbouring Trossachs to establish the Loch Lomond & The Trossachs National Park. The loch has many islands, including Inchmurrin, the largest freshwater island in Britain. An area brimming with wildlife, including golden eagles, mountain hare, red deer, ptarmigan, black grouse, and colony of red necked wallabies on the isle of Inchconnachan.

The wintertime sees an influx of 1% of the world’s geese population emigrating to the park every year. The best way to explore the area, not just the Loch but also the rest of the Trossachs is by foot. Luckily enough, there are a wide range of different routes.

Of the many thousands of lochs across Scotland, the Highland has the widest variety, and many of the best known. The most famous of these, is of course, Loch Ness. Known to be the largest volume of water in Britain, the Loch was made famous after a ‘sighting’ of ‘ Nessie the Dinosaur’ that became famous around the world. Although many have flocked to Scotland to try to catch another glimpse of the monster, there has been little photographic proof of its existence.

There are however, a variety of different ways to explore the loch by foot that make the very most of its beauty and who knows, maybe Nessie will re-emerge. For those looking to continue their prehistoric monster hunt, there have also been claims of an unspecified creature at the glorious Loch Morar (this one has been nicknamed Morag).

There are also a selection of excellent walks round the loch, and none better than the 3 hour journey to Tarbet. What Loch Awe lacks in stories about underwater beasts, it makes up for in trout fishing, ruined castles, hydroelectric power stations and a selection of great walks.

The Best Loughs in Northern Ireland

Steeped in Irish folklore and one of the largest areas of water in the British Isles, Lough Neagh is one of Northern Ireland’s must-see nature spots. As legend has it, Finn McCool, a famous irish giant, scooped up a chunk of earth and threw it at a scottish giant rival, and the crater that remained, filled up with water, to form the Lough.

Located in the heart of the country, it’s catchment area is 4,550km2, with 9% of it’s area spilling over into the Republic of Ireland, the lough connects with 5 counties and is home to a number of islands and peninsulas.

It’s also popular for Eel Fishing and is seen as one of Northern Ireland's best lakes to swim in the whole of Northern Ireland due to shallowness. In terms of experiencing Lough Neagh in its entirety, the 2km Toome Canal Walk is ideal for a casual stroll.

Made up of two different loughs, the smaller Upper lough and Broad or Lower Lough, and bridged by the town of Enniskillen, this is an area renowned for its beauty. The lough has over 150 islands, the two largest Inishmore and Galloon. Much like Lough Neagh, it is not short of folklore, with it named after the Goddess Erne that was said to have drowned there, and was also the setting for an underwater kingdom in the tale of ‘The Golden Apples of Lough Erne’.

There are a number of different walking trails around the lough, as well as activities including watersports, angling and even water trampolining.

The Best Lake Destinations in Wales

At 6km long and almost a kilometre wide, Bala lake is the largest natural body of water in Wales. It offers a wide variety of aquatic life, including pike, brown trout, eels and also a rare local fish known as the Gwynaid.

The lake is a popular spot for yachting, kayaking and other boating activities. At the northern eastern end of the lake sits the town of Bala, and for 4km along the side of the lake runs a railway line. To explore the lake in all its glory, there are a number of different walks you can go on.

An area brimming with both real and mythological creatures, there is so much to see at the recently named Llangorse Lake (formerly known as Llyn Syfaddon/Syfaddan, and Brycheiniog Mere). It has long been a Site of Scientific Importance, given the wide variety of birds and fish found in unusually high numbers, and has a nature reserve formed around the boundary of the lake.

In 2011, hundreds of water vowels were introduced into the area, as an effort to restore their numbers. It is also known for having extraordinarily large Pike, to the extent where there has been claimed sightings of the Afanc, (a water monster from Welsh folklore), swimming in the lake. Wildlife and nature aside, a number of watersports take place around Llangorse, and there is of course, a range of walks.