Walking vs. Running: The Benefits

Walking as your main form of exercise? Or running? Or both? Here’s our rundown of the best bits about each approach. 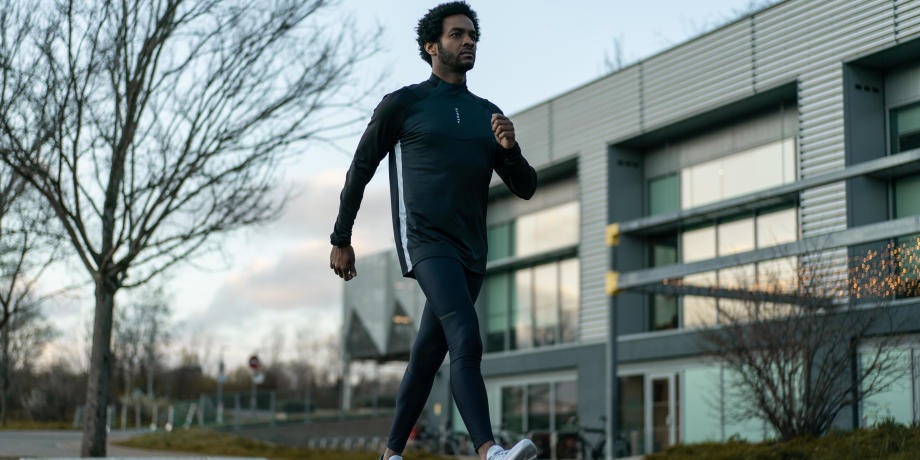 Whether you’re looking for a new way to get to work, coming back from an injury, or just want a new way to get and stay active, you'll want to know how running and walking will benefit your health.

Of course everyone has different aims, so before you start googling ‘what’s the best trainer for walking to work’ or any other hasty purchases, pause. We want to help you highlight the positive of each exercise, and ultimately allow you to decide what works best for you.

Is walking good for you?

It’s something we do everyday but rarely ask the question. Especially in the current situation, we're all wondering how we're going to get back to work or whether there's a safer, healthier way to do so.

How long to walk a mile? Is walking better than running? With the uprising of smart based technology a few years ago, there has been a growing fascination with the idea of walking as an exercise with a minimum daily step count. The usual mantra of '10,000 steps a day' has somehow made it into the new normal, and now, an increasing demand for an additional reccomended 30 minutes of exercise a day.

However, ‘active walking’ (45 minutes and more than 10,000 steps) is now seen to be the time at which walking will start to have similar cardio and muscle endurance effects to that of running.

Walking is for all ages. Put simply, it's accessible

Whether you’re 8 or 80 years old, getting up and stretching your legs through walking as an exercise is an excellent gateway activity to lead an active lifestyle.

Unlike running, it doesn’t require training, you can do it anywhere, and can be done alone or with others. That said, if you are looking to get into walking as an active pursuit...

Although it is good for strengthening joints, running also has the ability to cause them damage. This can be due to a variety of reasons, including a pre-existing knee conditions, running on uneven or hard terrain such as concrete, incorrect shoes or not enough stretching before you set off.

The movement of walking helps both lubricate your joints and mobilise joint fluids, meaning it is excellent for those with arthritis and can also help ease knee pain.

From Friedrich Niezche to Nikolai Tesla to today’s Mark Zuckerberg, many great thinkers have paid tribute to walking as an excellent way to free up creativity and get the brain working. There are many theories for this. A popular if not surprising belief within scientific circles is that this happens because the notion of walking actually requires a lot of brain power, as we have to coordinate various parts of our body to work in a functional manner.

Combining the two different parts of the brain (the logical left and creative right), ideas are allowed to metaphorically flow. There’s also the theory that walking allows humans a ‘cognitive pause’, which allows the brain to take a break from preconditioned thinking and to think more freely. Walking is also seen to have meditative qualities, as through gentle exercise the body can release tension from the brain, which will in turn allow freethinking to flow.

Walking can make you a better runner

Pushing yourself with brisk walks isn’t just good for your wellbeing, it’s actually also great if you have any ambitions as a runner. It’s highly advisable when starting out to begin by taking both long and brisk walks that will prepare your body for the pressure you will be putting on it during long distance runs.

It is also believed that walking has excellent recovery qualities after arduous running, acting as both a great stretching and massage session.

So what are the benefits of running?

Probably the oldest and simplest way of staying mentally and physically fit, it plays a large part in most sports, and takes up a wide range of real estate in athletic competitions.

Skipping the obvious that one of the best things about running is getting somewhere quicker, the benefits of running are widespread, and include some you might have not previously thought of.

Running is a cardiovascular exercise that stimulates the production of new red blood cells that will increase the blood flow around the body. As this happens, blood will flow towards parts of the body that aren't as active during exercise (such as the arms and hands).

As the heart receives a larger blood volume, over time it will adapt and be able to hold more. This will mean that with each heartbeat, more blood can circulate around the body.

It's great for increasing muscle endurance and stamina

One of the quickest ways to slow down someone during their workout is the buildup of lactic acid. The more you run, the more you train, the quicker your body is able to clear lactic acid from the bloodstream, which means your muscles can work for longer before fatigue sets in. This also means that the body is able to recover quicker after exercise and therefore more likely to avoid injury.

Running is perfect for gain-based goals

To run regularly is a lifestyle choice, and is also good to think of a long term project that you can improve at slowly over time, to receive a greater sense of accomplishment.

Not having specific or manageable targets can be an issue for anyone with a desire to be more active. Too often people will look to exercise as a way to simply ‘lose weight’ or ‘get fit’, but have no real focus on where they want to get to, or what would happen if that aim has been achieved.

However with running, it’s easy to aim to achieve small gains which will in turn result in a larger overall success. It is also a type of exercise which you don’t have to frequently do to start feeling the effects of it. Even two short runs a week in your routine can lead to dramatic improvement on both your mind and fitness levels.

With its ability to relieve the body of stress hormones and replace them with 'happy' hormones, running is possibly the best form of exercise when it comes to coping with stress.

Not only that, but with it’s powerful endorphin releasing qualities, running can also help improve your mood. Last but certainly not least, this ability to release negative stress also benefits the part of the brain responsible for learning and improving memory. Isn’t it funny how far running can take you?

There are of course similarities between running and walking

Many of the same muscles being used, both activities are being undertaken in similar circumstances, you can do them with similar durations. So, after looking at specific positives of each exercise, let’s also cover both the benefits that walking and running share.

The obvious: they both burn calories

It’s commonly thought that running is the best and quickest way to burn calories. But in reality, it actually all depends how much time you have to exercise. Of course, if you run for 30 minutes and walk for 30 minutes, you will burn off more calories running. However, given the intensity that running requires, it's not sustainable for most of us to run for as long as we are able to walk.

It has been recently proven that with the fluctuating pace of a walk, humans can end up burning off more calories on a 90 minute stroll than through a 30 minute run.

The not so obvious: a boost in vitamin D

Treadmill and crosstrainer work aside, most running and walking is done outside, and depending on season, usually in sunlight. This is where we source most of their Vitamin D, although due to the average amount of time spent indoors these days, many humans actually have Vitamin D deficiency.

This can result in a variety of issues, including bone pain, muscle weakness, cardiovascular health risks, developing cancer and also severe asthma for children. It may seem like a simple one, but even choosing an activity to do outside might have some long lasting effects.

They keep the eyes healthy

This may seem like a surprising one, but it has been proven that low impact exercise such as regular walking and running have major benefits to the long term quality of your sight.

It’s also been mentioned that the simple act of being on your feet decreases the risk of diabetes, high blood pressure, and heart diseases, all of which can lead to cataracts and macular degeneration.

It’s also known that cardiovascular training can help lower intraocular pressure on your eyes, which can help you avoid glaucoma.

Frequent running and walking can extend your life

Possibly the greatest benefit of all, both running and walking can help avoid illness brought about in old age. It’s been said that routine walking and running can add up seven years onto the end of years life, simply because they both act as antidepressants and therefore able to fight some associated cognitive diseases such as onset dementia and alzhemiers. They also are excellent in fighting later life ailments such as high blood pressure, high cholesterol levels and also diabetes. So even if the motivation isn’t there at the moment, deciding to actively pursue walking or running now will reap its rewards later on.