What Is Yoga? | A Complete Guide

Find out everything you need to know about an ancient Indian discipline that’s become an important part of modern life for so many.

Published by Matt from Decathlon 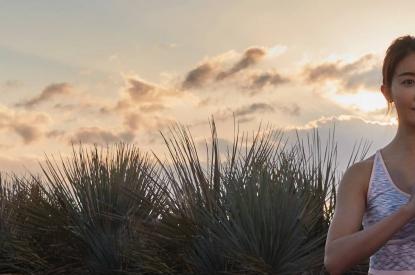 Yoga is a group of physical, mental and spiritual practices that are intended to bring together physical, mental, spiritual, and social development. Based on the practices and goals of Hinduism, Buddhism, and Jainism, there are four paths (or types) of Yoga. There is Karma yoga, Kriya yoga, Bhakti yoga, and Jnana yoga. Research has shown that yoga can help stress, improve immunity and breathing capabilities.

Where does yoga come from?

The word Yoga derives from the Sanskrit word “Yuji,” which means union. It’s an ancient practice that helps bring together the mind and body. While it has been practiced in several forms for over 5 thousand years, Yoga in its most classic form has existed for 2,000 years. This came from Indian author and Sage Pantanjali who created the Yoga Sutras, which are learnings that have formed the foundations of the practice as we know it today. The 19th century saw a post-classical form of yoga, with many philosophies becoming westernised and certain teachers and authors such as Swami Sivananda, Tirumalai Krishnamacharya, Maharishi Mahesh Yogi gaining worldwide popularity. In modern times, Yoga is practiced in gyms and studios across the world. Many of the current styles are based on Hatha Yogas, first introduced by Pantanjali with the Yoga Sutras.

Why Should We Do Yoga?

In today’s world, almost everyone is somewhat imbalanced or removed from feeling like their optimum self. Yoga works on the mind, body and spirit.

There are now a plethora of classes available to suit all requirements and abilities. The great thing about Yoga is that it is non-competitive and can suit anyone's requirements. It can be greatly beneficial whether you are wanting to become calmer, more flexible, balanced, or looking for a way to help heal an injury. With a little research, you can find a class to suit your needs.

There is a common misconception that Yoga is either about making pretty shapes or sitting down in a peaceful pose. Though this can be very fun, these are idealised images of Yoga, creating a mysticism that makes it feel inaccessible.

In reality, most people are moving towards Yoga due to injury, a lack of flexibility, or a need to relax or rebalance in some way. While many get involved with the practice to fix an injury, they stay because it helps them lead a balanced and healthier lifestyle.

Everyone has their own reasons for stepping into something new. Within the vast world of Yoga, finding the tools can help someone towards becoming a happier, healthier version of themselves, whatever that may be.

Yoga is known for stress reduction and the promotion of relaxation. Many studies have shown that yoga decreases the release of cortisol, which is the hormone primarily responsible for stress. One study followed 24 emotionally distressed women and after 3 months of regular yoga practice, they had lower levels of cortisol and felt less stress, anxiety, and depression.

Studies also show that yoga can decrease symptoms of depression. One study found that after practicing Sudarshan Kriya, a type of yoga that focuses on breathing, participants had fewer symptoms of depression for just two weeks. Yoga is helpful combined with traditional methods of treatment.

Yoga is often practiced before bed, and for good reason. One study found that elderly patients who practiced yoga, instead of taking herbal supplements or the control group, fell asleep faster, slept longer and felt more well-rested.

Yoga is a wonderful way to cope with anxiety. Studies have shown this to be true, as well. One study of women diagnosed with anxiety disorder took classes for 3 months. The practitioners of yoga had lower levels of anxiety than the control group. Another study looked at post-traumatic stress disorder (PTSD). After 10 weeks of yoga, 52% of participants no longer met the criteria for PTSD.

For more information on how Yoga can help with your mental health, check out our PLAY article on the subject.

Heart health is necessary for the health of your entire body. Studies have shown that yoga can help promote heart health. One study found that one year of yoga plus dietary modifications and stress management helped heart disease suffers lower their cholesterol and halt the progression of the illness in nearly half of them.

Many people take up yoga to gain flexibility and perfect their balance. A recent study found that after just 10 weeks of yoga college athletes were much more flexible than their control group counterparts. That’s one good reason to take it up!

You know that yoga can help with flexibility, but you should also know it can help with strength as well. One study showed that adults who performed 24 Sun Salutations six days a week for 24 weeks significantly increased their upper body strength, endurance and lost weight. Those are amazing results.

Yoga is often practiced before bed, and for good reason. One study found that elderly patients who practiced yoga, instead of taking herbal supplements or the control group, fell asleep faster, slept longer and felt more well-rested.

How to start yoga

The early stages are all about getting used to the practice. Yoga is all about taking your time, settling in, and making sure that you don’t overextend yourself. Good flexibility and an overall sense of calm won’t come after two or three attempts, so it’s good to just get yourself comfortable. If you’re looking for a yoga class, do some research into the different types of yoga. Different types of yoga work for different people, so finding the one that suits your needs is an important first step.

Check out our list and find the form of Yoga that works for you.

What is it? Seen by many as Yoga in its purest form, these classes are usually about getting the body slowly used to the basics through the use of slow physical movements.

Who is it best for? In short, beginners. Hatha Yoga will teach the best starter poses and its slower pace means first-timers can ease themselves in. There’s no point kicking things off with a style that’s just going to make you quit immediately.

What is it? A dynamic dance-like style that links movement and breath. Unlike Hatha, there isn’t a great deal of time between each pose, and the fast pace nature gets the heart pumping. To help get those involved in the zone, Vinyasa Yoga teachers will often pump music during classes.

Who is it best for? Those that love intense exercises such as HIIT classes, due to their fast pace. The relentless nature of Vinyasa also means it is also an option for endurance athletes and runners.

What is it? Focused on alignment, this is a style of yoga where precision is everything, and every posture is held for a long period of time. It is common to use props such as bricks, bands, straps, and rope walls, as they will help you work with a range of stretches and movements safely and effectively.

Who is it best for? Due to its intricate nature, it’s best for Yogis where the devil is in the detail. It’s also really good for helping rehabilitate long-term injuries and can be practiced at any age. For those looking to get involved in Iyengar, it’s worth starting at level one to get used to the technique, even if you are experienced in other forms of Yoga.

What is it? A form of Yoga that is as tricky as it is ordered. Consisting of 6 series of sequenced poses, the aim is to build an internal heat through flow and breath. What makes it slightly more challenging is that each pose needs to be followed perfectly in every class. While in some classes teachers will be calling out each movement, much of the time the yogis will be on their own (although there will always be someone there to help.

Who is it best for? Yogis that both love a challenge and are perfectionists.

What is it? Yoga with lots of sweating. It involves two breathing exercises and 26 poses in a room heated to approximately 105 degrees and 40% humidity for an hour and a half. Many find it tough, dehydrating work, so make sure to bring a bottle of water!

Who is it best for? Those that love routine. Despite the heat, it’s great for people new to yoga as it’s the same thing over and over again.

What is it? Both physically and mentally challenging, this is a far cry from a typical Yoga Class. During the class, yogis perform repetitive physical exercises accompanied by demanding breathing work. These are called Kriyas. They also will be chanting and singing. This is all done to break down mental and emotional barriers and release untapped energy and a profound level of self-awareness.

Who is it best for? People that are looking for something more than just a flexibility workout. Kundalini brings spirituality to yoga, putting the focus on breathwork, mediation, and energy.

What is it? When people talk about yoga helping them find their ‘zen’, it’s usually through Yin Yoga. Contrary to faster-moving styles such as Ashtanga, Yin Yoga is all about holding poses for longer periods and helps develop elasticity and length, whilst targeting deeper connective tissues. Like other mediative activities, it can make people feel irritable at first, but after a few classes, the calming results will start to show.

Who is it best for? Those who want to both stretch and relax. However, it’s not great for the already super flexible, as it could lead to overdoing poses and getting the whole practice wrong. It is also not advisable for those with connective tissue issues.

What is it? Similar to Bikram in that it’s in a heated room, although its classes allow more freedom and do not follow the same 26 moves.

Who is it best for? People that love demanding workouts and sweating.

What is it? A slow, chilled form of yoga, which allows the body to connect with the nervous system, and hopefully reach a deeper level of relaxation. Often includes bolsters, yoga blocks, and blankets to support the set poses.

Who is it best for? Everyone! It’s an excellent way to unwind, especially for those that struggle with anxiety, insomnia, and also athletes on recovery days.

For more information about yoga for beginners, click here. Also if you’d like to get started with Yoga at home, check out our PLAY article on the subject.