What Kit do I Need to Go Surfing & Bodyboarding as a Beginner?

A surf school will provide a surfboard and a wetsuit for beginners. If you want to buy your own board, your weight, height and fitness level will be factors.

One of the great things about trying out surfing or bodyboarding is that you really don’t need much to get started. Many people have their first surfing experience on holiday, whether it be in Bali, Hawaii or in the home of British surfing, Cornwall. Before taking to the waves, it’s a good idea to start with a surfing lesson with a trained professional. You’ll go out with a group, some will be beginners, and some may have been surfing before. But one thing’s for sure, you’ll have fun learning the basics, and if you’re feeling confident enough you might even be able to stand up in your first lesson.

A good surf school will provide all the equipment you need, including the all important surfboard or bodyboard and a wetsuit. And if you fancy trying surfing in the winter, they’ll usually supply boots, gloves and a hood for extra protection. You can always get some equipment of your own once you have a few lessons under your belt. But first, let’s look at the differences between surfing and bodyboarding.

What are the different types of surfboards?

Surfboards come in all shapes and sizes, and there are many things to consider when choosing a board. A beginner will need a different board compared to an advanced surfer. You’ll also need to take into account your fitness level, your weight and height, and what type of waves you’re going to be surfing, as all these factors will determine which surfboard is best for you.

A good size surfboard for a beginning surfer would be around 7 feet long, 22 inches wide and 3 inches thick. It does depend on your size, so make sure you can comfortably carry the board and move it around easily in the water. Just choose a surfboard that’s at least a foot taller than you. A soft top board is a good option for a beginner as they provide lots of float and stability.

There are five main types of surfboard:

How can I choose the right bodyboard?

When choosing a bodyboard, it’s important to buy the most suitable one for your height, weight and experience. The right size board should come to belly button height when standing on the floor. The shorter the board the more your legs will be dragging in the water behind you, slowing you down.

The two main types of core material used in bodyboards are dow polyethylene foam (PE) and polypropylene foam (PP). Dow has been used in bodyboard cores for decades, and although slightly heavier, offers good flex, excellent projection and solid all-round performance when the water is colder. PP boards are naturally lighter and stiffer, but can be too stiff in cold water. Newer 3D cores incorporate both PE and PP foams in sandwiched layers.

Fins are also an essential part of bodyboarding, not only because they play a significant propulsive role in getting into the wave fast, but also while riding the wave. They can also be considered a life-saving piece of equipment that will keep you out of trouble in case you get caught by a rip current or are dragged out to sea. 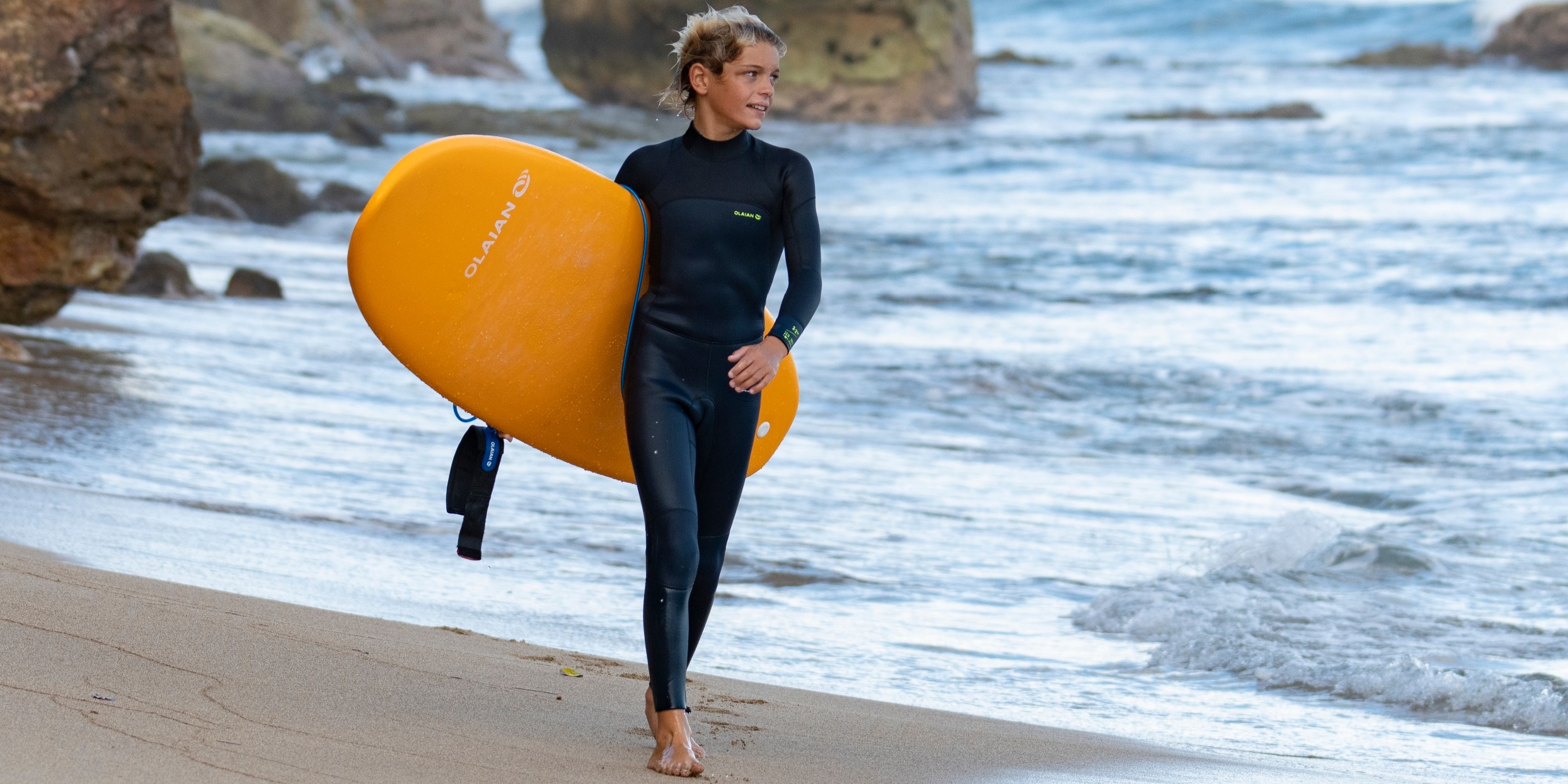 What is the ‘Glossary of Surfing’?

If you’re doing your research on surfing, you’re probably coming across lots of words and thinking - huh? That’s because surfing seems to have a whole language of its own. There is an ever growing list of surfing terminology, but here are just some of them so you too can learn the lingo:

Riding the board briefly into the air above the wave

Waves that break over sandbars

When the wind makes a wave too choppy to surf

When a surfer's weight is too far back, and the surfboard nose lifts up

When a surfer turns at the bottom of the wave

When the swell of the water breaks, turning into waves and white water

A sharp turn on the wave face

A turn cutting back towards the breaking part of the wave

When one large wave is closely followed by a smaller one

Ducking your body and surfboard under a breaking wave

A surf move where the surfer rides the top of the wave, then drops back into the main part of the wave

When a wave is higher than an average surfer

Going from lying on the board to standing, all in one jump

A stretch of water that is particularly turbulent

Falling off the surfboard when riding a wave

And here are the names for the different parts of a surfboard:

The block of foam from which a surfboard is made from

The upper surface of the board

A cord that is attached to the back of the board, which straps around the surfer's ankle

The forward tip of the board

A surfer's collection of boards for different kinds of waves

The side edges of the surfboard

The back end of the board