What to Watch? A Skiers' & Snowboarders' Guide to Streaming

Can’t wait to get back on the slopes? Check out the rundown of our favourite ski and snowboarding films that will get you ready for some mountain fun. 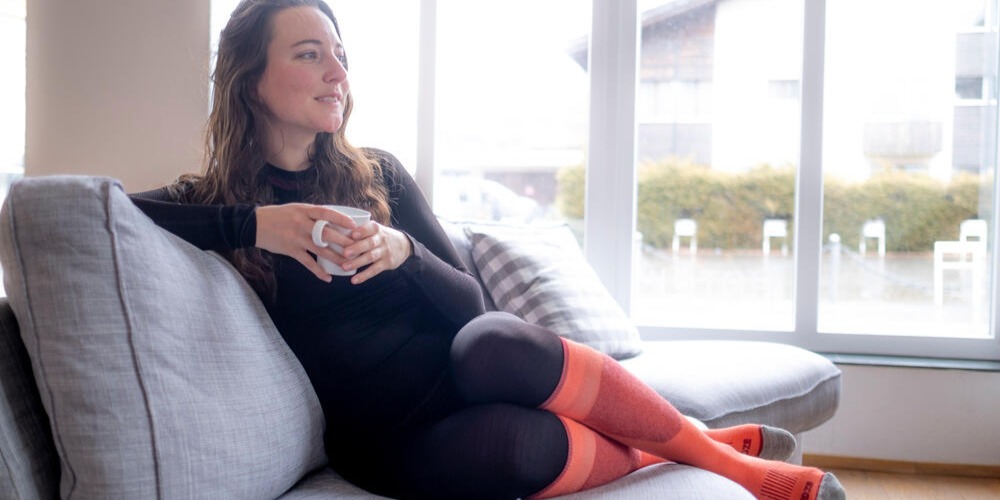 Credit: A woman chilling in her ski socks, streaming series and films

Whether you’ve never been or are a seasoned pro, just a fan of the stunts, or just love the spectacular views, skiing and snowboarding films are the perfect antidote for those searching for a little bit of sporting escapism. Although it can’t replace being there, we believe our selection of documentaries and films are the very best next thing.

The Blizzard of AAAHs

Directed by champion skier Greg Stump, this 1988 film is seen by many to have put extreme skiing on the map. From the French alps to California’s Squaw Valley, The Blizzard of AAAHs brings a wild, rockstar sensibility to the world of skiing, and will certainly scratch the itch of any mountain-loving thrill-seekers out there.

An intimate travel diary that follows five friends and their guide as they journey by skis across the French and Swiss Alps. Using as little transport and C02 emissions as possible, this is a ski documentary that captures the beauty of these famous mountains and their hidden valleys, and also highlights the impact of both overuse and climate change on their ecosystems.

Set in the Pakistani mountains known as the Karakoram range, this multi-award-winning ski film follows a freeride expedition attempting to reach one of the most remote and beautiful skiing sets of ski slopes that the planet has to offer. A journey that brings together both the perils and enjoyment of mountaineering and freeride skiing.

A superbly soundtracked extreme skiing documentary that combines spectacular stunts with a closer look at the home lives and influences of some of the sport’s household names. Starring Johnny Collinson, Kelly Sidaru, Candide Thovex, and Samuel Atthanhatten, but to name a few, this is freeride skiing of the highest calibre.

Being an elite athlete is as much about dealing with the lows as much as celebrating the highs. When Lindsey Vonn, America’s greatest ever female in the history of skiing, visited the surgery room for the second time in two years after another crash, many thought her career was over. Here’s what happened next.

Usually known for his shorter, point of view viral clips of extreme stunts and is seen by many as the greatest freeride skier in the world, this award-winning documentary looks at the life and career of Candide Thovex. Along with his past successes, it also follows Thovex as he attempts to jump Chad’s Gap in Utah, a feat never previously completed. Once you’re done with this, you can experience even more Thovex on his Youtube channel by clicking here.

Crowned world champion in 2019, brother of the legendary Xavier De La Rue, and seen by many as the most exciting freestyle snowboarder on the circuit, Victor has the world at his feet. In this extreme snowboarding documentary, Victor takes on the monster that is Chamonix and takes his boarding skillset to a whole new level.

And now for something a little different. Although this isn’t specifically about snowboarding, this short video follows Mathieu Crepel as he switches to a surfboard and prepares to tackle the legendary Hawian wave of Pe’ahi, also known as Jaws.

If you're streaming on Red Bull

Made by the Austrian freeride and film production crew Legs of Steel, this documentary takes us on a journey across some of the world’s most amazing ski resorts. Shot in 4K over two seasons, Passenger shows you freeride and alpine skiing at its very finest, and will have you preparing your next trip as soon as it ends.

This ski documentary has something for everyone, whatever your style when out on the slopes. From the Swiss mountain to the slopes of Japan, we see some of the world’s greatest alpine and freeride skiers doing what they do best.

Believed by many to be the world’s most dangerous ski race, we follow the year-long journey of downhill skiers Aksel Lund Svindal, Max Franz, Erik Guay, and Hannes Reichelt as they prepare, both physically and mentally for the challenge. Strap yourself in, it’s a wild ride.

The Art of Flight

Shot by multi-award-winning director and producer Curt Mogan, The Art of Flight is seen by many as one of the most progressive snowboard documentaries around. With over a dozen renowned snowboarders, including Travis Rice, Nicholas Muller, and Mark Landvik, and filmed across the Americas between 2009 to 2011, it’s a film that shows snowboarding at its most beautiful.

A history of snowboarding documentary that celebrates the rise of female boarders, focusing on the profiles and careers of some of the world’s finest, including Mary France Roy, Robin Van Glyn, and Leanne Pelosi, who was also one of the film’s producers.

That’s it That’s all

The second Curt Morgan Travis Rice collaboration on our list. Filmed by helicopter across a wide range of locations including New Zealand, the United States, Japan, and Germany, it offers a more expansive all-encompassing perspective on the sport.

A look into the lives of the Nitro Snowboarding Collective as they travel to some of the world’s top boarding spots. From mountain parks to remote off piece spots, this extreme snowboarding documentary shows everything that life as a thrill-seeking athlete has to offer.

A classic sports film. Made in 1985, Warren Miller’s ski documentary is now seen as the dawn of the extreme approach to skiing that we all know and love today. Following legendary athletes such as Billy Kid, Craig Paterson, Stein Eriksen all across New Zealand, Japan, France, and the United States of America, this is retro skiing at it’s finest. Available to purchase on Amazon Prime.

The Spirit of Flatness

A doc that shows snowboarding is as much about imagination as it is a spectacle. Traveling to Finland, both home to superb snow and spectacular views but also severely lacking mountainous or hilly terrain, director Pawel Jaworski and borders Axel Thipsan and Janne Lipsanen find their progressive ways to create spectacular stunts. Available with a Prime membership.

For those of you streaming on Netflix

The Don’t Crack Under Pressure Series

The first of this so far three part series was released in 2015 and the heavy metal brainchild of Thierry Donard. Although it also includes surfing, biking, and skateboarding, the series as a whole certainly has enough for snow thrill-seekers.

And finally... on Netflix, and Amazon Prime

We felt our streaming list could do with a romantic comedy entry. Released in 2015 and starring the Oscar-nominated Felicity Jones, this ski film is the not so serious look at life on the slopes and the humorous ups and downs of a ski season. Available with Prime and Netflix Memberships.